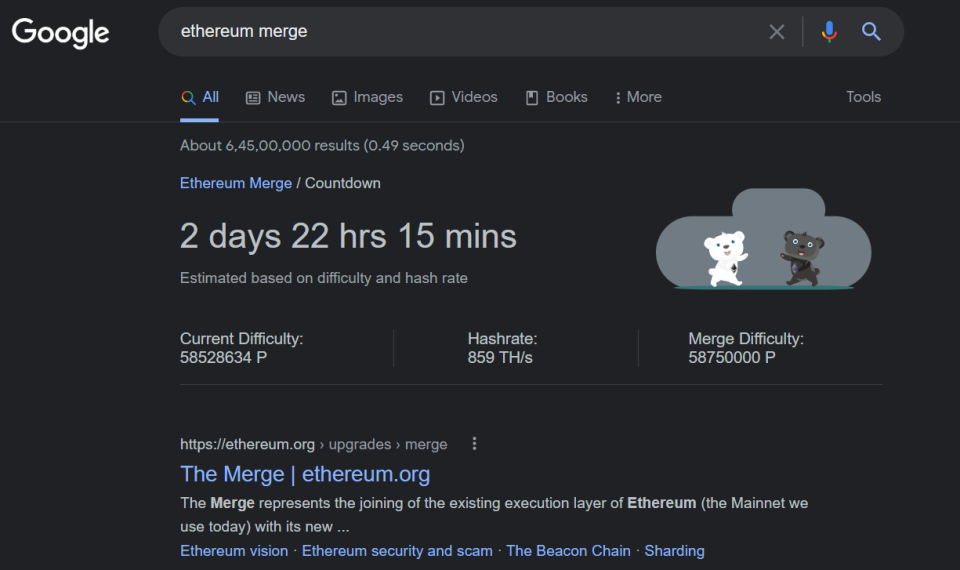 Google is fully invested in the Ethereum Merge hype, maintaining a strong interest in the topic. In honor of the approaching Ethereum Merging, the tech business has released an easter egg in the form of a merge countdown meter.

The easter egg emerges when a user browses for the keyword “Ethereum Merge” and other linked search words. For the last 30 days, search data for the forthcoming Ethereum blockchain merging has been trending with a steady trend score of more than 50.

The countdown ticker indicates the projected time remaining until the merging and information on the present, hashrate, algorithmic difficulty, and merge difficulty. The timer also depicts two cartoon pandas, each clutching an item that resembles Ethereum’s logo. According to its creators, the cartoon pandas’ image will get closer and correspond with the merge.

Everyone is so excited for what is coming and appreciative of the work that has been going into this for years. pic.twitter.com/3bgifV6Ywn

Google’s action is a significant signal of its support for the Ethereum Merge. The Ethereum Merge has already been eagerly awaited by the crypto world, and it is encouraging to see that Google has joined in on the excitement.

Google’s growing interest in cryptocurrency and Web3 has resulted in the formation of its Web3 team and the release of a malware-detection algorithm for its Google Cloud services. Sky Mavis, the development company behind the famous Web3 game Axie Infinity, has partnered with Google Cloud to strengthen its security and node integrations for the Ronin blockchain.