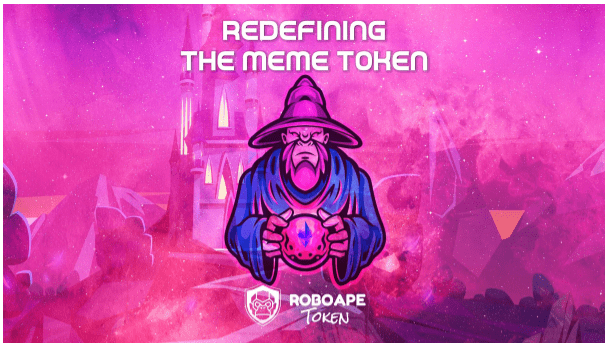 Following the success of Dogecoin (DOGE) and Shiba Inu (SHIB), meme coins have gained traction in the cryptocurrency world. This has attracted investors and other crypto enthusiasts to ride the wave of memecoins in the hope of getting profits from their investments.

Most people still believe that meme coins are nothing but meme cryptocurrencies without value and that Dogecoin (DOGE) and Shiba Inu (SHIB) had nothing but lucky breaks.

However, this is not the case. Most meme tokens possess excellent attributes and contribute mainly to their community. Tokens like RoboApe (RBA), a token built on the Ethereum blockchain, are constantly trying to utilise new technology to compete with the established competition.

Dogelon Mars (ELON) is a dog-themed meme project believed by some to be based on Elon Musk’s vision to occupy the planet Mars. Entering the crypto market just recently, it has attracted a lot of the public’s attention, boasting of a community of over 1 million people.

Although relatively new to the crypto market, it has shown good price acceleration in recent months. With the rate of its growth and with proper planning and execution, investors could see excellent returns provided the bull market returns. Acquiring meme tokens before these event occur is one of the best ways to feel the vast benefits of the bull market.

The Safemoon (SAFEMOON) project was developed in March and gained attention in the public sector. It is one of the most known cryptocurrencies in the meme token industry after Dogecoin (DOGE) and Shiba Inu (SHIB).

A DeFi token, it encourages peer-to-peer networking and trading without the involvement of banks or any other financial institution. It is seen as a long-term investment token as fees are charged for every transaction made on its blockchain to prevent regular trades.

As Safemoon (SAFEMOON) was launched, several notable figures became interested in the token. This encouraged celebrities such as  Lil Yachty, Logan Paul, e.t.c invest in it. This led the token to experience social media buzz, encouraging their present investors to increase their investments while attracting new investors at the same time.

As the demand for DeFi features increases, there is every reason to believe that Safemoon (SAFEMOON) will soon have a massive play in becoming one of the most recognized meme tokens in the world.

Like Safemoon (SAFEMOON), RoboApe (RBA) is a decentralized community-driven token that focuses on various projects, including DeFI, NFTs, charity organizations, media, and even sports. It is built as an ERC20 token on the Ethereum network.

The holders of the RBA token will be able to earn rewards for lending collateral to the network in exchange for liquidity. The RBA token is expected to be the driving force behind all cryptocurrency and meme fans.

The RoboApe (RBA) platform has also developed an academy to bring together crypto enthusiasts, analysts, and newbies to create a well-educated group of people who understand cryptocurrency and blockchain technology.

The NFT sector as well won’t be left out. RoboApe (RBA) intends to use its marketplace as a platform for purchasing and trading NFTs with its affordable fees measured in RBA tokens. It would also be able to host mining events on this platform.

This token’s diversity would contribute to its expanding ecosystem, raising its value and making it a viable long-term investment.

In conclusion, it is safe to say that meme tokens are not just fun and games but have a lot to offer to society. With tokens like Safemoon (SAFEMOON) providing long-term investments and RoboApe (RBA) with its diversity, catering for the DeFi community down to the NFT sector, these tokens have proven to be suitable investments and promise their investors more profits in the long run.

Which Crypto Coin is a Good Investment in 2022: Fantom (FTM), FTX token and FIREPIN (FRPN)