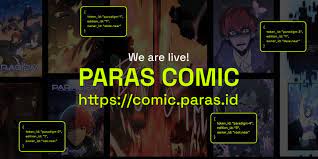 We’ve all grown up reading comic books about imaginary characters, superheroes, comedy, science fiction, horror, and several other topics. We and everyone else who has read comic books have had a tremendous influence on us, providing us with unforgettable experiences to remember and a way to escape from our everyday lives.

Since everything has been available at our fingertips, we rarely see people reading comic books anymore. However, this digital transformation has brought about a positive change, as comics have become widely accessible and even available to own via the digital transition.

Not only that, but we had hoped to meet the legends behind the comics we had admired, loved, and cherished our whole lives, but that remained a fantasy. Technology has advanced to the point where you can now engage with and support the authors and read and buy their comics.

Paras Comic is one such digital comic that is now the buzz of the town. Paras Comic has made tipping interactive by allowing you to own, connect with, communicate with, and even support the creator through the collector NFTs.

Paras Comic has organized a comic championship in order to attract new talent and curate existing talent in the comic industry. Participants will compete against other creators, receive valuable feedback from the judges, and possibly have their comics displayed on the Paras Comic platform for other comic fans to enjoy.

The Genre of the competition

The competition, which was set to begin on April 22nd, will run through July 2022 and will focus on the theme “Fantasy into Reality.” The competition organizers were looking for Action-Fantasy and Romance-Fantasy to offer the creators an opportunity to bring their ideas to life.

Simply create your own comic universe and characters, and show the world how far your narrative can go and how long your main character can live. The period for submissions is April 22nd to May 30th, and the top 15 comics and creators will be published on the Paras Comic website on May 31st.

The final round will take place from June 1 through July 18, with the winner being revealed on July 20. Even though the competition was free to enter, Paras Comic has maintained intriguing rewards for the winners. The first and second place winners in the action-fantasy category will get IDR 40,000,000 and 30,000,000, respectively, while the Romance-Fantasy category will receive the same amount.

Appreciation of the talented creators

In addition to the enticing rewards, Paras Comic had revealed that the first 15 competitors will get e-certificates, a special trophy, and Paras Comic goods, and the first two winners from each genre will receive an exclusive trophy and Paras Comic merchandise.

What does the future hold for Comic book lovers and artists?

There will undoubtedly be significant changes in the comic industry in the coming months as a result of digital collectibles. By giving creators and comic book fans the option to own their comics and creating an income source for creators, Paras Comic is poised to become a major player in the digital comic industry. The comic book industry must preserve its collectible status as it transitions to more digital sales, and if NFTs can fill this void, the industry is more likely to welcome them.

If you are interested in browsing the Paras Comic collection, they currently have 2-3 chapters free on most collections at https://comic.paras.id/ .