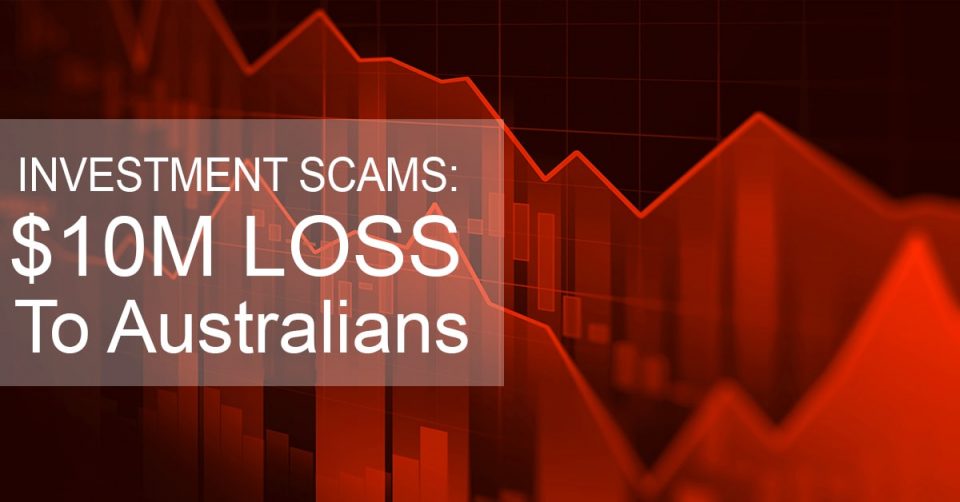 Australian Competition and Consumer Commission or ACCC’s body Scamwatch publishes the latest data, and it is about scams. The data display losses as a result of investment fraud of more than $10 million. This fraud took place in the first three months of this year.

The people suffering the biggest losses are mostly from 55 to 64 years of age. As per reports, most active people to report scam ranges between 25 to 34 years of age. Australians reported over $10 million loss as a result of investment fraud with 1073 reports.

As per reports from March, it is less as compared to February. The amount counts a total of over $4 million. While in January, it was less than that of the two months.

Investment scams mostly involve traditional markets like real estate, stocks or commodities. People report that the scammers call victims and claim to be authentic personnel like a stockbroker or investment portfolio manager. They claim to offer inside information on a stock or even about an asset. Scammers fool people and claim the asset or stock to rise in value in the respective markets. They also claim to offer the service which is less risky, quick and provides a high return. Their attractive offerings fool people, and they become victims of their fraud.

Investment scam prevails these days widely and also involves cryptocurrency trading. It also includes binary options. Amongst them, crypto scams are increasing day-by-day since last year. Then comes attractive offerings, the scammers do to fool people. As a result of their lucrative offering, scams happen, and a big lump of investments turn out to be a fraud.

The different concepts including digital token and coins, ICOs and cryptocurrency, prevails as present-day frauds in Australia. As per Scamwatch reports, cryptocurrency is a type of scam that prevails the most in Australia presently. It rose considerably since last year leaving behind investment scam offerings.

Deputy Chairman of ACCC, Delia Rickard says that cryptocurrency trading is similar to investment offerings that fool people. It is because in both the cases where scammers claim to contain information about the market pricing to attract people. She also adds that if someone invests money on these types of scams, their money will disappear.

Scamwatch also advises some tactics as a warning sign to people who invest in stuff like that. They can check how the scammer approaches them and offers high promises. If they say the investment is risk-free or low risk and high return, certainly people are dealing with a scammer. Some more keywords are like “be a millionaire soon in a month” or things like that, so be careful. Do not invest in such investments. These are the advice of Scamwatch.