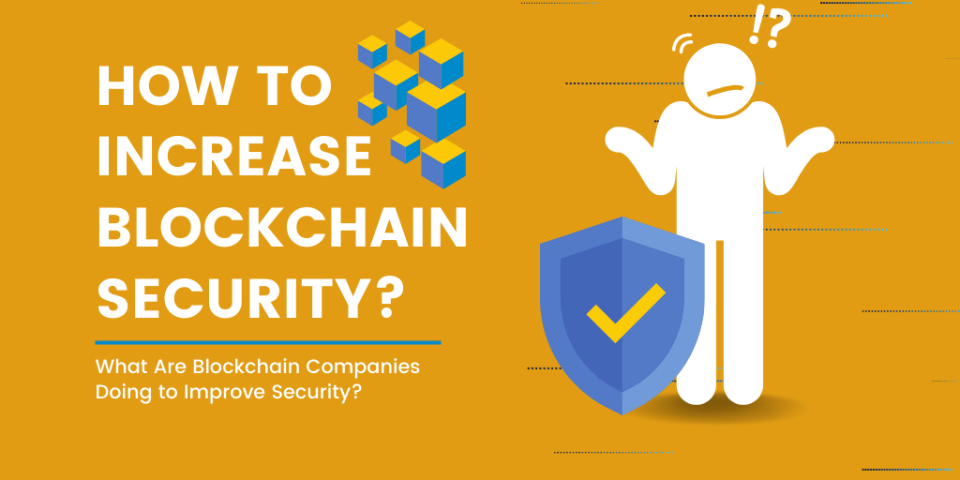 Blockchain is a new technology constantly evolving and developing new processes for as many industries as possible. At first, blockchain technology was considered something only crypto projects could use. But things change faster than we think.

Nowadays, more industries use blockchain technology than we have ever imagined. And if you are wondering why it is because blockchains come along with two of the main things almost every company is looking for: speed and security.

However, as secure as blockchains might be, attackers always find new ways of getting what they want.

Thus, is it possible to increase blockchain security?

Well, as you were probably thinking, the answer is yes. And let’s talk about how blockchain companies aim to increase users’ and digital assets’ security.

What Is a Blockchain?

A blockchain is a distributed ledger (or database) that is shared among a computer network. Each computer is called a node and stores information digitally.

Even though blockchains are often associated with crypto, other use cases exist. Blockchain technology can be used in many industries, such as healthcare, retail, automotive, or telecommunications.

The main goal of a blockchain is to store information without letting it be edited or removed. And this is why blockchains provide high security for those using them. The fact that information is stored on multiple computers spread all around the world makes it harder for hackers to temper it.

Furthermore, considering that blockchains are decentralized and secured through cryptography increases the security even more.

Another thing worth considering is that the blockchain data is immutable, which is achieved because a block is always dependent on the previous one.

Every block is secured by a cryptographic key consisting of a formula that includes everything stored in previous blocks, including their keys. Thus, if somebody tries to go back and edit information, it will not be recognized by the chain. And even if that person attempts to modify the chain, the network of computers will still have the originals, preventing the fake from disturbing the consensus.

This happens because to change a past record, all the blocks following it should change, too. And considering that data is stored in multiple places unrelated to one another, the blockchain will keep the information most network computers (nodes) recognize.

However, even extremely secure projects can be hacked, and this includes blockchains.

How Can a Blockchain be Attacked?

As we said before, although blockchain may be more secure than any centralized option and is constantly improving, hackers improve their activity, too. This way, they will always find new vulnerabilities that can help them hack a blockchain.

Some of the main security threats blockchain users are facing are the 51% attack, the Sybil attack, the Phishing attack, and the Routing attack. They all imply getting some piece of information on the blockchain and then using it to access various digital assets.

The 51% attack may be the most popular among crypto users, requiring a hacker or a group to have at least 51% of the hashing power on a network. This way, they can mine faster than other users or even mine new blocks without announcing the rest of the network.

Such attacks can leave a blockchain with major losses. For instance, in October 2022, the Binance exchange was hacked and lost $570 million (2 million BNB).

What Are Blockchain Companies Doing to Improve Security?

Even though there are blockchain vulnerabilities that hackers can use to get surprising amounts of crypto or fiat, blockchain developers can still do something about it.

In order for a blockchain to maintain its security, developers must consider factors such as adaptability, upgradeability, and flexibility. And to do that, some companies, such as Redlight Finance, decided to have a dedicated security team to monitor network and server activity.

Furthermore, it is essential for blockchain projects to choose the mechanisms they work with very carefully. For instance, according to ResearchGate, while Proof of Work can suffer many types of attacks (51%, Long Range, DDoS P+ Epsilon, Sybil, Balance, BGP Hijacking), Proof of Stake cannot be affected by three of the attacks mentioned.

However, despite analyzing the attacks a blockchain can suffer, it is essential to consider other factors, such as scalability. While security is truly vital to a blockchain, a network is also necessary to provide high speed and other advantages for its users.

Blockchain technology may be one of the most popular topics in the tech industry these days. And many companies decide to use this in their activity, as blockchain provides high security for those including it in their strategies.

However, blockchains are not completely protected from attacks like other tech projects. They can still be hacked, and some of the most popular attacks include 51% attacks, Sybil attacks, routing attacks, and phishing attacks.

Blockchain projects are constantly improving security along with other features, and some of them decided to have a dedicated security team to ensure they protect data from being accessed by ill-intentioned individuals or groups.

While updating the system to improve security, blockchains should also work on increasing or maintaining scalability, for example, as it is one other essential factor for a network’s success.

Everything You Need to Know About Crypto Games on PlayLobby

How to conduct an excellent crypto influencer campaign for your project