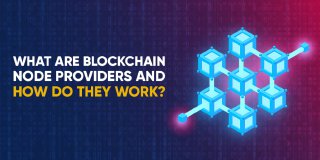 For those new to the blockchain space, numerous concepts may seem unfamiliar to them. One of these concepts is nodes and their role in the blockchain ecosystem. Here is a detailed guide on blockchain nodes.

A blockchain node is a program running on a computer that lets you connect with the blockchain network. It connects with other nodes to share information, validates transactions, and stores data on the state of the blockchain.

Why is Operating a Node Difficult?

It Can Take Weeks to Set Up

For an inexperienced developer, it can take weeks to set up a node. The reason for this is that developers usually must set up tools that do not directly contribute to what they are building.

Light nodes have become more simplified in recent years. However, their operators still need to install the node program. They must set up the configuration variables, download block headers, check ports, and conduct regular maintenance to ensure they run as designed. Setting up a light node can take a few hours to a few days to complete.

Full nodes are harder to set up. The biggest issue with a full node is that operators need to download all blocks from scratch. They then must manually replay all the blocks and transactions submitted to the blockchain in its entire existence. On the Ethereum main net, that equates to over 10 million blocks, and billions of transactions, which will take weeks to sync.

They Have to Be Managed Regularly

Once you set up a node, it needs regular maintenance. Upgrades have to be made every few weeks, and sometimes it has to be rebuilt from scratch, such as in the case of a hard fork or node client upgrade.

In some cases, running a query, known as “queries of death,” can entail going through millions of blocks, and transactions. When that happens, it often leads to the node crashing or timing out. As such, operators of a node must keep a close watch over it, sometimes having to debug it in the middle of the night.

When managing a full node, there is always the risk that it will fall behind the network for several reasons. They can include connection challenges, getting stuck on outdated branches, problems with the internal state, and more. Once left behind, a node operator is served stale data, which they may not realize.

When you decide to operate a node, working with one is manageable. However, if you decide to scale up and operate more nodes, it becomes impossible. Some may attempt to hack it by running two nodes and setting up a load balancer between them. However, since nodes see the latest state of the blockchain in slightly different ways, it can cause inconsistent data to be generated, as well as other user-facing issues. These issues only get worse as you operate more nodes.

For clients, blockchain node hosting allows them to enter and exit any blockchain at any time. The node providers save you a huge amount of time, and effort, which can be spent on building your application. Using a node service provider allows you to use their endpoint API to query the node you deployed to obtain information about the latest blockchain data.

If you decide to use the services of a reliable blockchain node hosting service such as CryptoNodes.io, some of the benefits you will get include:

Whether one is an experienced developer or a beginner without any knowledge or experience on how to operate blockchain nodes, doing it on your own is extremely hectic and time-consuming. Using the professional services of a node provider will save you time, effort, and resources.

Running blockchain nodes comes with numerous risks, the initial setup cost is high, and there is no guarantee it will continue working without continual maintenance. For a business that must focus on other aspects of the service, it is best to use the services of a reliable blockchain node provider such as CryptoNodes.io. Doing so guarantees that the entire process is efficient and does not take away effort and resources that could have been used to develop the core services of a business.