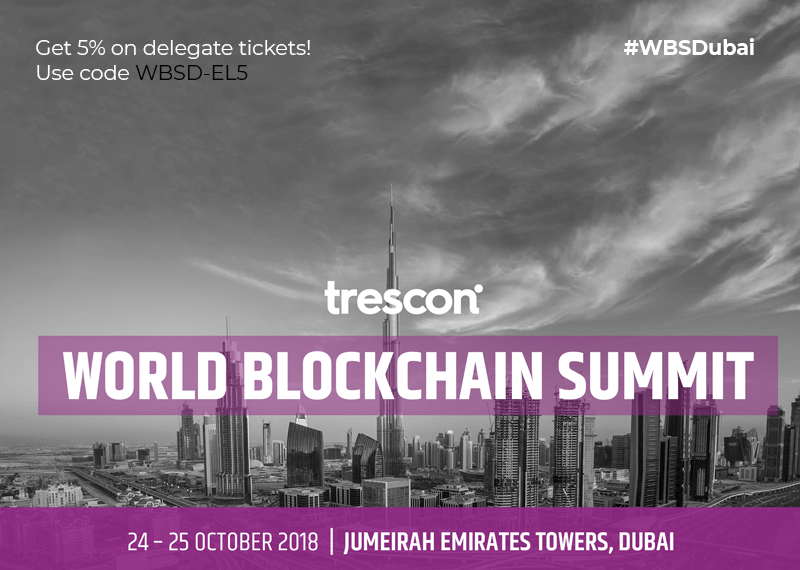 More than 1000 delegates were in attendance at the 2017 Dubai edition, which gathered key international blockchain experts, government policymakers, and also witnessed a presentation on Dubai’s Blockchain Strategy.

Thursday, 11 October 2018, Dubai: World Blockchain Summit has been on a world tour since last year, covering cities like Nairobi, Moscow, Frankfurt and Singapore on its way, and will touch down in the Emirates this October. The event is taking place on 24 – 25 October 2018, at the Jumeirah Emirates Towers in Dubai.

The summit is notably one of the first blockchain conclaves, since the recent blockchain boom, which started its global tour last year and is now set to travel to 15+ destinations all over the world. The event is particularly known to attract key government policy makers, enterprises, technology providers and blockchain enthusiasts from all over.

Ledger-based services and startups have accumulated more than US$ 500 Million in funding globally, and this edition of the summit will put into perspective the diverse private and public sector adoption processes as well as the digitization of assets for business operations.

Another topic which has raised questions across the World is the ‘Need for Regulatory Commissions and Charter Laws’ for the wide-scale adoption of ledger based technologies. As some governments remain either tight-lipped or mute around the subject, representatives from vocal governments will be taking part in an exclusive ‘All Government’ panel at the World Blockchain Summit Dubai. The panel will feature Mr Jason Hsu (Congressman from the Legislative Yuan Taiwan), Mr Bitange Ndemo (Chairman for the AI & Blockchain Task Force of Kenya), Mr Oleksii Mushak (Member of Parliament for Ukraine), Mr Gilbert Reveillon (President of ICT & Digital Economy, CNCCEF France), Mr Vit Jedlicka (President, Free Republic of Liberland) and Dr Ian Gauci (Partner at the Afilexion Alliance for Malta). The panel will discuss the regulatory landscape for nations, as well as talk about the ‘Future of Blockchain in Governance’.

The summit also hosts one of the world’s biggest ICO presentation platforms, the ‘ICO Grand Slam’, which is a dedicated platform for verified ICOs to pitch their idea in front of renowned investors and hedge funds. This will be taking place on Day 1 (24th of October, 2018) of the summit. ICOs stand a chance to raise up to US$ 1 Million in funding, as well as experience the global market first-hand!

Mohammed Saleem, CEO of Trescon, has stated that “Dubai has always been a hub for technological innovations. It definitely surprised us, when we had a stellar outcome for the first summit in 2017. We now know that we cannot expect anything less from the ‘City of Gold’, and are now committed to turning Dubai into the blockchain capital of the world”.

What is Team Owner?

Blockchain and Genomics: Why DNA is Going Crypto