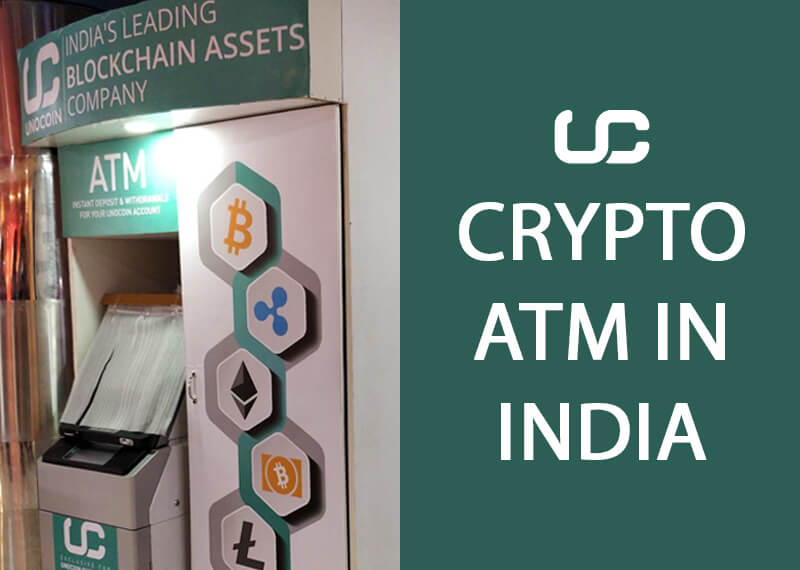 A leading Crypto exchange firm in India, Unocoin officially announced that it is all set to launch Crypto ATMs in the country. These Crypto ATMs will aid people to cash out and cash in, which was not possible earlier following the ban on crypto banking imposed by the central bank.

Earlier this week, Unocoin revealed its plans of launching crypto ATMs (Automated Teller Machines) in India. The CEO of Unocoin Sathvik Vishwanath, stated that at present the firm is planning to launch thirty ATM machines in three cities of the country. In an interview with a local business insider, Sathvik confirmed that the first crypto ATM would be deployed in Bangalore the next day; to be followed by New Delhi and Mumbai the next week.

The Unocoin ATMs
Unocoin gave a detailed explanation saying that all the users of the company and its crypto-crypto trading platform, Unodax, can withdraw and deposit cash using these ATMs. The customers can deposit and withdraw a minimum amount of 1,000 rupees which should be in multiples of 500 rupees. Sathvik further explained that all the coins on Unodax and Unocoin can be purchased using the cash deposited via ATMs.

Overcoming the Crypto Ban
The central bank of India, RBI, in April 2018, initiated a ban on financial institutions under their management from providing services to crypto businesses. The ban went into effect in July and Unocoin announced the adjournment of its fiat support at the same time.

The CEO clarified that the ATMs built by them do not need any kind of banking involvement as these are stand-alone machines that can dispense and accept money. In its latest announcement, the company further explained how the customers can deposit and withdraw cash by using these ATMs.

How the ATM works..
To Deposit Indian rupee, the customer needs to enter his user ID and the OTP that he received on his registered phone number. Accordingly, his account gets updated and later the funds credited to his account can be used for both Unodax and Unocoin.

In the same way to withdraw Indian Rupee, the customer first has to make a request by using the official website of Unocoin, “Unocoin.com” or by visiting the Unocoin mobile app where he can enter the desired amount of money for withdrawal. After that, a twelve digit reference number and OTP from Unocoin will be shared with the user to be entered into the ATM, following which, the withdrawal can be completed successfully.

About Unocoin
The Bangalore-based crypto exchange firm was formed in 2013 and is handled by about 120 full-time staff at present. It claims that the company has done more than two billion rupees worth transactions for around 1.2 million users already. Within a very short span, Unodox is already backing 4 major cryptocurrencies and over 60 crypto-to-crypto trading pairs.

What do you think of Unocoin’s plans of launching crypto ATMs in India? Will it help people in getting easy access to the cryptocurrencies. Let us know about your views in the comments section.