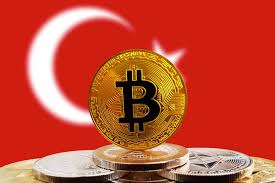 Turkey has vouched for Bitcoin and welcomed its stay which has propelled a global decline in trust on cryptocurrencies. A news study has also revealed that Turkey is one of the countries that has accepted the furthering of cryptocurrency across the globe.

ING, the banking giant has taken the liberty to publish a new study from the research they have conducted on crypto. The research has unveiled that Poland, Romania, and Turkey are seeing a surge in interest pertaining to Cryptocurrencies. But the population that has once vouched for crypto is slowly showing a steady decline except the countries mentioned above.

A sample survey that was conducted in Turkey shows that a whopping 36 percent of the Turkish population are willing to have their salaries in Bitcoin and are likely to have that currency become an integral part of their financial architecture. But with the decline of crypto enthusiasm in Europe, these three countries are still the banking on the interest they have over cryptocurrencies.

The volatility is anticipated to be the only setback since the ordinary denizens only address the short-term nature of it, as opposed to long term charts which shorten the impact it has on its volatility. But the day to day volatility is something that has scared many investors.

Successful investing would mean that the investors are also emotionally resilient to the upheavals in the market, which makes Bitcoin valuable to even begin with.

Once the decentralized aspect of BTC is comprehended and the impact it has on the economy, the volatility factor can be shrugged off with ease. The short-term mobility can also be ignored at the same time if someone is looking at the long-drawn game since one can draw in large scale profit in the long run.

With 36 percent of the Turkish population agreeing to take their salary in Bitcoin, the ratio can be surmised as a whole on Europe’s summit. The survey has covered around 12 countries of Europe which has revealed the decline since the citizens from Europe is more skeptical about cryptocurrencies as of yet. However, the study might have been compromised, probably due to its sample size which was relatively small-scale. The proportion might not change since the survey only covers a very small portion of Europe’s population.

Only 13 percent of the population in Austria vouched for the development surrounding cryptocurrency. As opposed to this percentage, Turks are still showing a promising number and the implementation there could be plausible since they have continued to rely largely on cryptocurrencies while pushing for its anticipated development. Austria’s number can also amount to an ironic situation since the economic framework of BTC has been inspired by the Austrian school of economics.

This decline can also be attributed to the apparent distrust and scams that took place over the years. However, hope still resides in the regions that need this implementation the most. And Turkey’s number is something to look forward to.