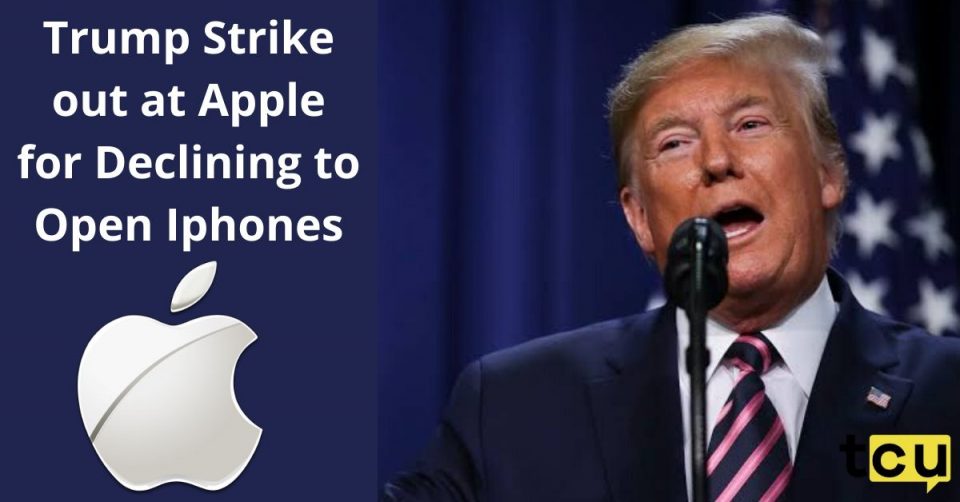 US President Donald Trump had sharp words for the tech giant Apple when he took to twitter to lash out at the company for refusing to unlock iphones belonging to two gunmen.

“We are helping Apple all of the time on TRADE and so many other issues, and yet they refuse to unlock phones used by killers, drug dealers and other violent criminal elements. They will have to step up to the plate and help our great Country, NOW! MAKE AMERICA GREAT AGAIN.”

Trump’s tweets came after the US Attorney General William Barr declared that the Florida naval air base attack by a Saudi cadet was an act of ‘jihadist terror’.

After the shooting at the air base last month, twenty-one members of the Saudi Military are being expelled from the country.

After the shooting, the government had asked Apple to unlock two iphones that belonged to the cadet. In an attempt to destroy the phone, the gunman had fired a bullet into it but the device was restored by the FBI.

“We have asked Apple for their help in unlocking the shooter’s iPhones. So far Apple has not given us any substantive assistance”

While Apple helped the FBI by giving them access to the iCloud data from the shooter’s account, they have reportedly refused to unlock the phone. This is not the first time Apple has done so. A similar incident in 2016 happened when Apple refused to undermine their cryptographic security on their phones. While the FBI was able to manage to unlock the phone last time on their own, it seems that this time, they are not able to.

Many in the cryptographic community have applauded Apple for taking a strong stand against government interference to undermine cryptographic security on devices but at the same time have urged the company to make stronger encryption by making their security software open-source so it can be verified and users can be sure that Apple can not by any means disclose their personal info.

Secure your digital assets with Plutus Capital and Onchain Custodian