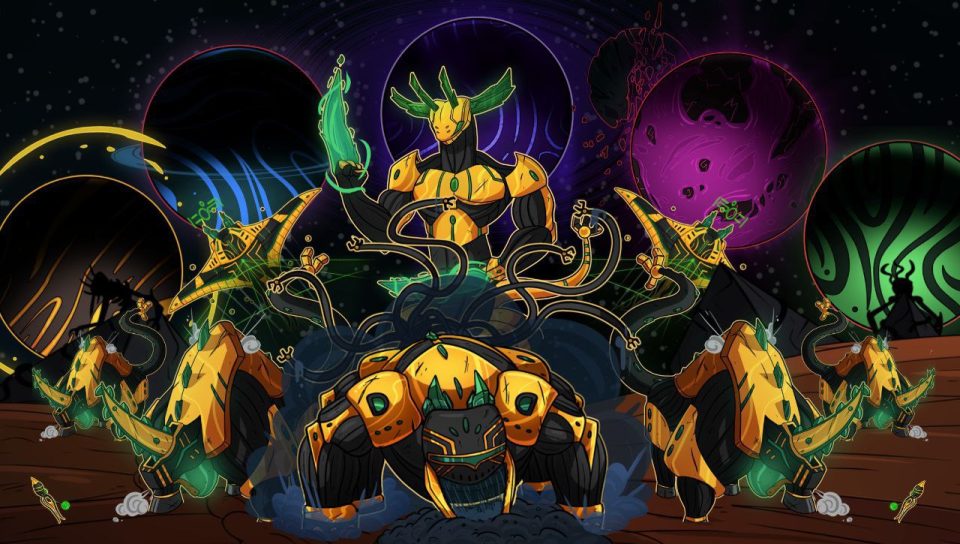 Board card games are still popular today, despite the rise of the video game industry. But so far, few studios have realized that these games can be transferred to the blockchain to become even more popular and more profitable. This was done by the creators of Dark Galaxies.

The blockchain from the future

The trading card game Dark Galaxies opens the way for players to the future when united humanity will go into space to colonize new planets and create new worlds. And then humanity will face other races (factions). Along with humanity, these factions own planets, defend and attack planets and mine the resources. And all this happens on the basis of a crypto-economy created by means of two tokens, Duterium (DTX) and Duterium Refined (DTF). The crypto economy backed by DTX, DTF, and NFTs, converts the card game Dark Galaxies into an exciting and beautiful Play-to-Earn experience.

DTX is the main token of the game, with its help rewards are paid for the defending of planets and for their attacking, lands on planets are bought and sold for DTX, and passive income is paid in DTX to planet owners. There is a hard limit of 1 billion DTX tokens created.

DTX also is used to buy the mining tools for mining a very valuable raw material that is on every planet – Duterium Refined (DTF). DTF is the fuel for interstellar travel. A gamer just needs enough DTF to be able to deploy his troops to defend his planets or to attack new planets. DTF is also the mining reward currency allocated to each planet. It is distributed to the player as a result of a successful mining attempt. There is a maximum supply of 100 billion Duterium Refined (DTF).

The game is based on a book series with well-developed characters and meaningful and logical plots. So the players will definitely not be bored. New books appear every three months and are distributed very widely in different formats like paperback versions, PDFs, and bundles. 3 books have already been published, and the release schedule is strictly observed. There will be 7 books in total.

Other worlds are inhabited by different races (factions), both evil and friendly. But all races are interested in colonizing new planets. This means that a clash of interests is inevitable. In total, the game features 6 factions: Human, Creature, Android, Jujari, Order of the Luma, and The Dread. Each faction has 10 characters. Each faction follows its own interests, enters into battles for planets and lands, and is equipped with weapons and tools for mining.

The player can choose from the four options as they wish, two of which are controlled by artificial intelligence (AI.)

Single Player means the gamer plays against AI to test his skills and strength with his set of card decks before taking it into battle.

Play Now option means that AI will seek and match an opponent of similar strength to battle for supremacy.

Create Game option means that the gamer creates his own match to battle against.

Planet Management is where a planet owner governs the planet and uses its resources on a full scale, recruiting defenders, and managing mining with the highest possible reward.

From a technical point of view, Dark Galaxies is a browser-based WebGL game built in Unity. WebGL (Web Graphics Library) is a JavaScript API for rendering interactive 2D and 3D graphics within the web browser without the use of plug-ins. This technology is most suitable for the tasks of the game, in which new fantasy worlds and entities serve to make a game environment.

Several card decks are created to let players own characters, planets, lands, and mining tools. All of these cards are pegged to NFTs with different pricing depending on the rarity. There are five increasing rarity levels: Common, Rare, Epic, Legendary, and 3D. And there are different NFTs for characters, planets, lands, and mining tools. Each NFT-type has its specific set of attributes, counting from 7 to 11. All the NFTs will live in the Dark Galaxies collection.

Dark Galaxies with several decks of characters, planets, lands, and mining tools can be an exciting adventure for everyone who loves science fiction and dreams of the future. With colorful cards, poker chips, a compelling storyline, and a solid cryptocurrency economy built on the trusted WAX blockchain in the Atomic Assets structure, Dark Galaxies promises players both fantastic fun, good income, and possibly a profitable early-stage investment. But this is not financial advice!