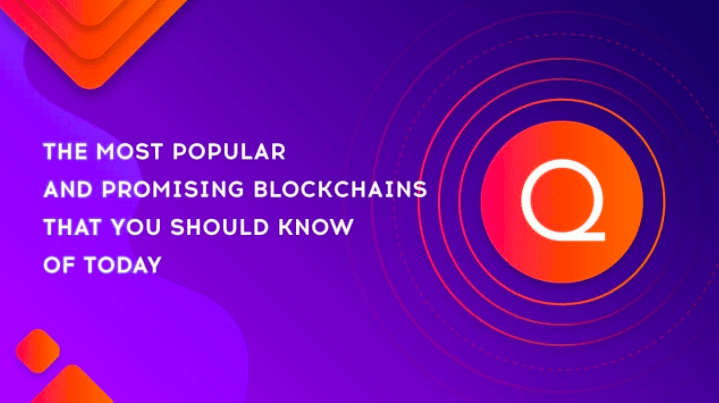 The world of blockchain is rich with opportunity, especially these days, when countless new projects are constantly launching, each bringing something new to the table. Blockchain technology has been revolutionary from the moment it was invented, but there are still many areas where it is lacking, and these new projects are trying to find new solutions to improve on those issues.

With that said, there are several blockchains that show a lot of promise, and are worth keeping an eye on, as advanced projects tend to become quite popular and widely used. While this can be good for developers and businesses that wish to switch to blockchain, it can also be beneficial to their coin holders, who might make quite decent earnings by dealing with their native cryptocurrencies.

The first on the list is Qchain — an advanced emerging blockchain project that aims to solve many of the issues that are plaguing the blockchain industry to this day. It uses a unique protocol based on TCP/IP, unlike other chains that are organized as P2P networks. This, in combination with a virtual communication channel for each node, allows information to be transmitted at rapid speeds.

Qchain also offers advanced smart contracts, great transaction speeds, scalability, and more, all of which gives it the potential to become one of the leading blockchains of the 5th generation.

While not a new project, Ethereum still deserves its own place on this list due to all the progress and development it has seen over the past nine or so months. As many likely know, Ethereum has revolutionized the crypto industry by shifting the attention from coins to blockchains, pointing out countless use cases for the underlying technology of crypto. For years, it was a leading development platform, and indeed, it is still unconquered.

But, Ethereum had its own problems, such as the lack of scalability, which led to increased transaction fees. On top of that, its processing time is slow, and in terms of technical capabilities, it is barely any better than Bitcoin. However, the project’s developers have been working for years now to change this, even though the results have not been released in their entirety yet.

We are, of course, talking about Ethereum 2.0, which started its implementation in late 2020, and is still ongoing. In the meantime, the project’s devs encountered a massive spike in the cost of transaction fees due to great use of Ethereum this year, which is why they recently brought a number of upgrades that will fix these issues to an extent. But, once Ethereum switches to PoS, brings staking, and speeds up the network, it will be a true force to be reckoned with.

Cardano, the project behind the cryptocurrency ADA, has also seen great amounts of popularity and usage earlier this year. Cardano has been around for a few years now, and while it was very popular among users, most of its development has been done in the background. In 2021, its devs finally started sharing the fruits of their labor, and introducing one upgrade after the other, radically improving the project’s ecosystem.

Right now, Cardano is on the verge of introducing smart contracts to its mainnet, and with them, the possibility to create dApps, new projects, DeFi protocols, and more. Cardano has always had massive amounts of untapped potential, and its tendency to take things slow has prevented it from rushing in with half-baked products. While it took some time, the project is now emerging as one of the top-level development platforms that might even be able to rival Ethereum.

Finally, there is Chainlink — a project that has been the first to introduce a method of delivering real-world data onto the blockchain in a reliable and trustworthy way. Chainlink’s oracles have been a major revolutionary leap that has connected the blockchain sector with the real world in a way that was never seen before.

Today, the project is partnering with companies in and out of the blockchain world, as its ability to transfer accurate, reliable data from the real world to the blockchain and its smart contracts is bringing an entirely new way of creating and using smart contracts. Chainlink is adding precision, the accuracy of the information, and, of course, the information itself. Best of all, it is doing it in real-time, making smart contracts more capable to be used for all the different use cases that they can achieve.