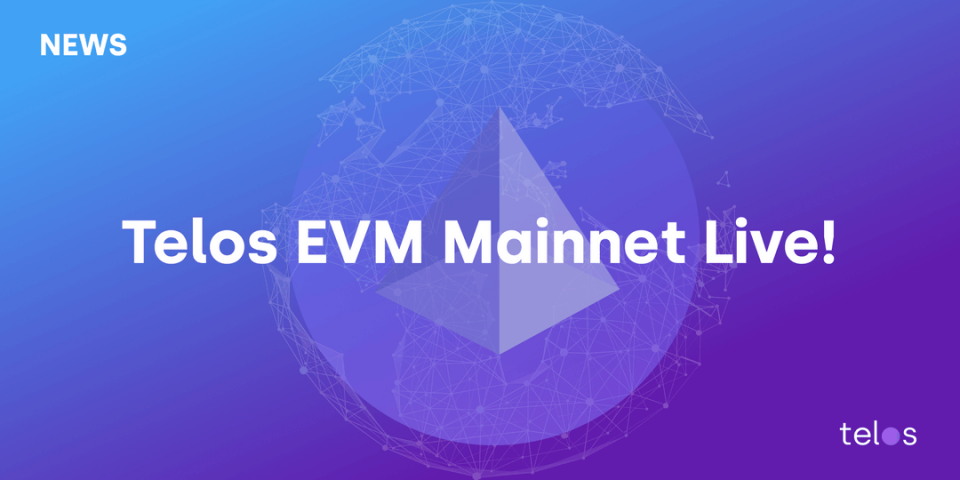 In a recently made announcement, it has been revealed that Telos has launched the most significant and impactful EVM to date. The EVM, reportedly goes beyond the potential of the Ethereum 2.0, as it allows the facilitation of the pace of Ethereum along with acting as a defender against crypto insider theft stealing ample amounts of money from small and big traders.

Though there is no denying the fact that Ethereum remains at the top position when we talk about the largest ecosystem for decentralized applications among blockchain networks, its expandability-related issues are increasing the need for seeking other options.

Talking further about where Telos stands after the EVM Mainnet launch, it is the latest third-generation blockchain that is not forked from the existing EVM implementations. This factor contributes to the smooth running of Solidity smart contracts that requires no further alterations while offering the same level of service as the original L1 blockchain. However, it should be noted that the efficiency of the same has marked a notable increase.

Discussing the features of the Telos EVM, it will be offering around 30 times faster transaction speeds to decentralized applications along with 100 times increased capacity and all of that with just 1% of the gas fees associated with Ethereum. In addition to this, it should be noted that due to significantly low consumption of energy, Telos has a cutting-edge advantage over other big names in the industry along with its interoperability.

The project that has been in the stages of development for over a year, has been launched now, marking the beginning of the revolution of Defi scenario and powering Web 3.0. It has also been officially revealed that the core developers of Telos managed to hit major milestones this month

such as acquiring audit approval from Sentnl, deploying the RPC servers, and launching the EVM mainnet.

Telos EVM is reportedly considered the future of large-scale and micro trading while solving the issues ignored by Ethereum 2.0. As the transaction fees of the Telos EVM is just 1 cent, making Defi trades is now feasible.

Moreover, the governance structure of Telos provides added advantages over other platforms in addition to speed, capacity, and almost zero transaction charges.

Learn More About the Telos Web Wallet 2.0 and Further Advancements

Well, it should be laid an emphasis on the fact that the new update brings improvisation in both the style and functionality of the Telos Web Wallet. This is where you will be going to manage your balance on both Telos Native and within the Telos EVM.

It seems that Telos is committed to offer exciting features to allure more developers and users into its ecosystem as in accordance with the disclosure of their roadmap, the team will now be emphasizing on Telos Private.

TelosPunks, the Telos’ Reiteration of CryptoPunks Coming to EVM

TelosPunks marked the first major project to be launched on the Telos EVM. Keeping the importance and future potential of NFTs, Telos EVM strives to make NFTs based on Ethereum, more accessible and powerful than ever before.

In accordance with the recent revelations, the TelosPunks will be featuring 10,000 all new collectible characters designed specifically for the Telos EVM. Along with this, it should be noted that the TelosPunks are setting a new example with this project by putting 5% of the total revenue generated back into the Telos network.

YooShi reached the top 100 in the global market value of crypto assets, how far is it from the top 10?