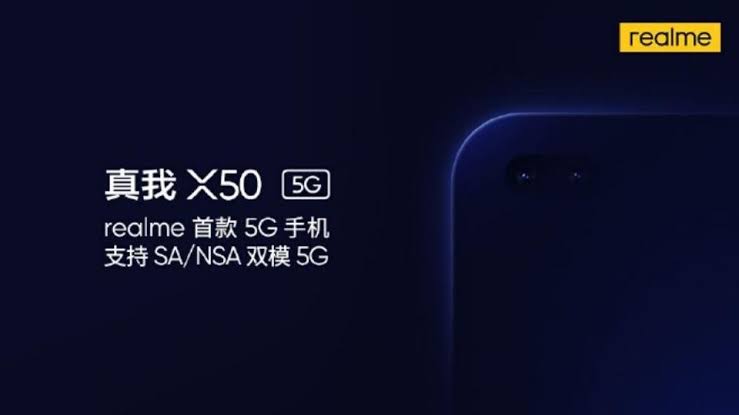 Realme has made a storm across Asian countries after the company did release the flagship killer device, Realme X2 Pro. As of now, the company is planning to enter the realm of groundbreaking technology, namely, 5G, by releasing the forthcoming 5G smartphone, Realme X50 5G. The Shenzhen manufacturer said that Realme X50 5G is the first-ever phone from the company, which features 5G technology.

The new leak regarding the phone is currently making rounds across the internet, which also suggests that Realme might be working on over one smartphone in the X50 lineup. Alongside the Realme X50 5G, there is another device, namely Realme X50 Youth, aka Realme X50 Lite.

The leaked specs of Realme X50 suggest that the smartphone would feature a 6.44-inch Super AMOLED Samsung E2 display, which comes with a refresh rate of 90Hz. As far as the processor of the device is concerned, the smartphone draws its power from Qualcomm Snapdragon 735 chipset, which comes with 5G-enabled capabilities. The phone comes in two RAM and ROM variants, i.e., 6GB RAM with 128GB ROM & 8GB RAM with 256GB ROM. At the time of writing, it is unclear if the smartphone would feature an expandable storage slot.

Realme X50 is predicted to flaunt a cutting-edge quad-camera setup like most of its competitors on the rear side of the phone. The primary rear camera would feature a 60MP + 8MP+ 2MP + 2MP camera sensors. On the other hand, the front side of the phone’s camera would come with a couple of dual punch-hole camera of 32MP and 8MP.

A robust 4,500 mAh battery would provide Realme X50 5G with a good battery backup. In addition to this, the battery module of Realme X50 would support the popular 4.0 VOOC charging.

The potential buyers have to compromise a little if they would buy the affordable Realme X50 Lite. According to the leak, X50 Lite would feature a 6.55-inch LCD JDI display; however, the device will not feature the refresh rate of 90Hz. The X50 Lite will come with the conventional 60Hz display unit.

MediaTek MT6885 5G SoC would power the Realme X50 Lite. The new chipset from MediaTek was an announcement a few months ago. Realme X50 Lite would also come in two storage options, such as 6GB RAM + 64GB ROM and 8GB RAM + 128GB ROM. It is unclear if the smartphone would feature an expandable storage slot.

As far as the camera of the smartphone is concerned, Realme X50 Lite would come with a quad-camera module with 16MP + 8MP + 2MP + 2MP. On the other hand, the phone would feature a secondary camera of 32 MP.

In addition to this, both Realme X50 & Realme X50 Lite would feature Dolby Atmos. At the time of writing, the specifications of the forthcoming 5G-enabled devices from Realme aren’t confirmed yet. Will the Realme X50 smartphone lineup challenge the big players in terms of 5G connectivity? Stay tuned!

How the age and gender of a player affects luck during online gambling games?