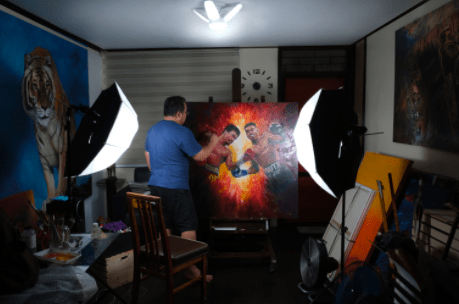 Powerfan, a platform that offers, among other services, the minting of NFTs, has partnered with Jun Aquino, a world-renowned artist described as “The Painter of Champions.” He has painted a Manny Pacquiao vs. Errol Spence Jr. commemorative painting that is personally signed by Manny Pacquiao and will be auctioned from August 20 to 27 at 6 PM PST when bidding closes and the winner announced.

Proceeds from the Unified World Welterweight Championship NFT sale will go towards the 42-year old’s Manny Pacquiao Foundation. According to Powerfan, bids will open on Friday, August 20. Participants can place, change, and raise their bids as many times as they wish during the week-long bidding period from August 20 to 27, as mentioned earlier.

Platinum and Gold winners will receive a physical painting of the NFT, behind-the-scene videos showing Manny interacting with Jun creating the portrait, and personalized thanks from the artists. Additionally, Powerfan has indicated that the winner will have exclusive access to future NFT Art sales.

In the Philippines, Jun’s work has been featured in various media, better known as the “official painter” of Pacman. His work influenced political, sport, and social discourses. The artist has also revealed that most of his sporting heroes were boxers, including Manny, Mohamed Ali, Mike Tyson, and Joe Frazer.

The artist plans to unveil these paintings immediately before the highly anticipated fight. Notably, there will also be four other art paintings sold as limited-edition NFTs with special bonuses during this event. This is to cater to the varying demands of various NFT enthusiasts. Each will be auctioned at different prices.

The rarest and the priciest will be the Manny Pacquiao NFT series. There will be ten copies available or $2.5k each. Recipients of these pieces will receive a customized print as well as a personalized video from Jun Aquino. Acquiring each of these pieces also grants the buyers exclusive access to all future VIP launches.

Meanwhile, under the Fighting Harada NFT Series of the “Flyweight & BantamWeight World Champion,” there will be 15 NFT pieces each available for $850. Purchases of these series pieces will also receive the same benefits and access as those who purchased the Manny Pacquiao NFT series.

Other digital depictions are 20 pieces of the Eder Jofre NFT Serie, “The Golden Bantam: One of the Greatest Punchers of All Time,” and the 25 under the Ceferino Garcia NFT Series, “The Most Victorious Filipino Boxer of All Time,” each selling for $500 and $250, respectively.

The digital pieces will commemorate the 12-rounder bout scheduled for August 21, 2021, at the T-Mobile Arena in Las Vegas. The diminutive Pacquiao will enter the ring for the second time in a bid to add another bullet point to what is already a remarkable resume. Markedly, it will be the second time for the serial winner to enter the boxing ring after turning 40.

At present, Manny is ranked third under the WBA welterweight category by the Ring. He’s two spots above Yordenis Ugas, who turned professional 11 years ago. Although odds are skewed against Ugas, he is the current champion of the WBA Welterweight category. Pacman won the belt in 2019 when he beat Keith Thurman in 2019, holding it for two years before being stripped early this year.

LABS Group to Materialize a Brand New Future of NFTs