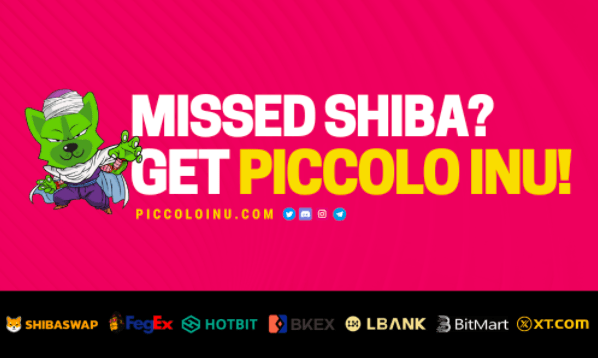 Piccolo Inu, a community-driven token that offers its patrons a completely transparent and innovative crypto experience has teamed up with Larva Labs to create an NFT based Play to Earn (P2E) card trading game.

Piccolo Inu is an anime inspired token and the card trading game it is building runs on the same lines, with each card representing an anime-styled Inu dog character. The game concept has been finalized and thanks to Larva Labs, the primary planning and pre-production stages of the gameplay and environment have been locked in. Both the Piccolo Inu and the Larva Labs teams are coordinating to create the GDD, or the Game Development Document, which will contain every detail and aspect of the card game, right down to the type of cards, characters, their abilities and how the outcome of each match will be determined.

The GDD presents a two-fold aspect. First, it will help developers as a blueprint upon which they will stably develop the complete gaming ecosystem. Secondly, it will serve as an information outlet for investors and players to understand how the game will perform, including knowledge of how it can become a source of profits through making the right investments or playing it more efficiently.

The game will first come out as a PC based beta version in Q2, 2022 and will follow up with a final release once all bugs are removed. Larva Labs and Piccolo Inu teams will then proceed to mobile versions for on the go entertainment.

The game will use the well-established trading card battle methodology, but this time using blockchain and NFTs. Each card will itself be an NFT, with all character statistics encoded in the non-fungible tokens. Since the cards are virtual, players will have the option to battle with local players or online competitors who can hail from any part of the world.

The NFT cards themselves come with varying rarity, from the most common to the ultra-rare. The more rare a card is, the more powerful and unique the character is. This automatically translates into the character having a higher chance of winning a battle due to its enhanced stats. Alternatively, the rare cards can be sold for profits at a much higher price than their common counterparts, making these an excellent investment option.

Winning battles and rounds will also result in an ERC-20 token reward, which can be either used to buy items from within the game, upgrade the cards and characters, or simply liquidated for fiat use in real-world life.

Piccolo Inu is already considering the creation of an expansive ecosystem based on its game. Tools such as AR (augmented reality) can be integrated into the game for players to view their surroundings to see free game items or even NFT cards that they can catch and claim for themselves. A metaverse is also being discussed to give players a complete virtual experience in the game.

While the meme token culture is on the rise, Piccolo Inu takes it to the next step by building an anime aspect into it. The team is already working on a decentralized exchange (DEX) PinuSWAP that will be dedicated to different anime tokens and coins, allowing all anime lovers to come together and trade their favorite tokens.

Piccolo Inu has been created to offer all anime lovers a token ($PINU) that is different from current offerings. A transaction tax distributes a small portion between other $PINU holders and sets some aside for marketing and development purposes. The staking option for $PINU has a fixed reward, enabling even latecomers to enjoy a steady stream of income.