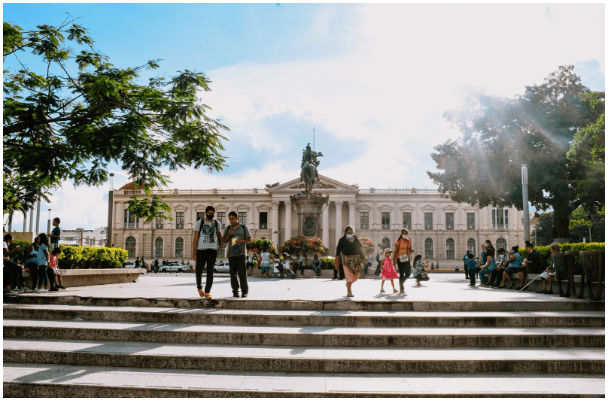 President Bukele is promoting Bitcoin City as a tax haven. The project is also to be financed with Bitcoin government bonds – a risky plan.

The small Central American state of El Salvador on the Pacific coast is betting on the cryptocurrency Bitcoin. After adopting Bitcoin as official currency alongside the U.S. dollar last September – a move unprecedented in the world – President Nayib Bukele is rolling out more ambitious plans.

In front of investors, he presented Bitcoin City – a separate city based around the cryptocurrency, to be built in the La Unión region. The special feature: As a special economic zone, no taxes are to be levied there apart from a value-added tax, which is usually 13 percent in El Salvador.

“Invest here and earn as much money as you want,” Bukele said, beating the advertising drum. He appears to be particularly targeting so-called miners, who generate new Bitcoin via computing power.

A geothermal power plant fed by the Conchagua volcano will be used to generate the energy needed for this. Last year, China, where about 70 percent of all Bitcoin was mined, pulled the plug on the mining industry because of the enormous demand for electricity. El Salvador is now looking to profit from the industry’s exodus.

Why Create a Bitcoin City?

Now or never, goes the saying. Well, that’s what Bukele thought when he decided to launch his great Bitcoin City project, which has already given both good and bad impressions among citizens and investors.

But the reason for this bold project is the current cryptocurrency market and the blockchain, which are the foundation of the NFT or Metaverse.

Moreover, despite the recent drop in value of cryptocurrencies, the market is still stimulated by DCA trading and automated bots used by investors. Hence, this can be seen as the right time for the transition to a real place where Bitcoin stands out.

Still, controversy goes hand in hand with this sort of risky ventures, and there’s a lot of this controversy reserved for Bukele – who’s in the middle of it all.

Last year, Bukele, who’s already one of the most influential figures in the cryptographic world, said that the government will provide the infrastructure and private investors will then build offices, shopping centers and apartments.

Bukele put the cost of this at around 300,000 Bitcoin. At the current Bitcoin exchange rate of about $57,000, this equates to $17.3 billion. The 40-year-old head of state is also partly relying on the cryptocurrency to finance the project. This year, he plans to issue government bonds denominated in Bitcoin for the first time.

But does that sound like a viable strategy? Crypto experts are not convinced. “The whole thing is already also born out of necessity,” they say of the president’s ambitious plans. “It’s all about attracting foreign investors.” These are to be lured to an offshore tax haven. “The citizens of El Salvador do not figure in these considerations,” the experts emphasize.

Already, the announcement to introduce the cryptocurrency as legal tender alongside the dollar was first made in front of a U.S. audience at a Bitcoin conference. “That alone shows what it’s all about,” the experts say.

Indeed, the launch last September was bumpy and led to protests from the public, where far from everyone shares Bukule’s enthusiasm for Bitcoin. First, the company’s own electronic wallet called Chivo, which means “cool,” with a $30 starting balance in Bitcoin, was not available for all mobile devices, and then there were other teething problems.

As a result, in everyday life, the 6.5 million citizens continue to pay almost exclusively with dollars, although merchants must accept Bitcoin that are technically capable of doing so.

Taxes can also be paid with it. But because of the high fluctuations in value, experts consider Bitcoin unsuitable as a legal tender. “Money must have a stable value,” he stresses.

In the World Economic Forum’s “Global Competitiveness Report,” El Salvador’s economy ranks 103rd out of 141. Until now, the country has lived off the export of coffee, sugar, shrimp, cotton and gold, as well as chemicals and textiles.

Whether a Bitcoin industry will now also be established or the project is built on sand remains to be seen.

Issuing government bonds in Bitcoin alone is highly risky. If its value continues to rise sharply against the dollar, this would also apply to government debt to the same extent.