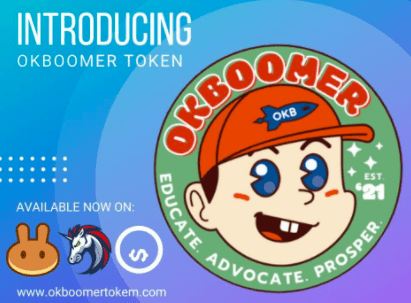 Under their new NFT initiative, OKBoomer will feature creative digital artwork depicting the likenesses of celebrities.

Already, the auctions of various NFTs, including those of Trinity, Peter Miller, and Chandler Catanzaro, are ongoing under the OKBoomer Champions NFT series on OpenSea.

OKBoomer’s Champions Collection are enhanced NFTs that provide both a unique individualized experience along with world-class collectible digital art.  For example, the initial sale of OKBoomer’s NFT for Emmy-nominated, Discovery Channel TV Host and 3-time world sailfish champion Peter MIller NFT can come with an eight-hour fishing trip in Coral Gables, Florida with Peter Miller and a rare appearance on his show, Uncharted Waters. This show can be seen on several cable channels, including the Discovery Channel, World Fishing Network, Amazon Prime, WaypointTV, and multiple social media channels, and the episode filmed with the NFT buyer will be released on an arranged date in 2022.

Other OKBoomer NFTs provide the chance to meet pro-football players like Bradley Sowell and Chandler Cantanzaro over a video conference.  OKBoomer’s Kevin Butler NFT comes with the opportunity to meet Kevin over a video chat and to receive a never-before-seen picture of Kevin with the Super Bowl Champion 1985 Bears.

The long-term plan of OKBoomer is to eventually partner with other top-tier sporting celebrities in the NBA, UFC, NFL, and other professional sports leagues. This will give its NFT winners more opportunities to interact with their favorite sporting personalities, further supporting the OKBOOMER token.  Proceeds from the ongoing OKBoomer Champions NFT Series and future auctions will be plowed back to boost the OKBOOMER token’s liquidity.

OKBoomer is also exploring building a museum on the metaverse to show off OKBoomer NFTs.

The OKBOOMER token is available for trading on PancakeSwap, the largest DEX on the BSC. At spot rates versus BNB, it is a low cap token with tremendous upside in a space where coins often post impressive gains.

Therefore, OKBOOMER’s valuation presents an opportunity for savvy traders to double down considering the project’s medium to long–term plans.

OKBoomer’s plans for the future are impressive.  For instance, the project’s creators aim to eventually shape crypto public policy by educating those in denial, most of whom are boomers, while also distributing crypto-related education materials to the masses.

Furthermore, as the project expands, the community will urge public officials to accept OKBOOMER tokens as campaign donations.

According to the team, the OKBOOMER’s valuation will be propped from NFT auction proceeds and podcast sponsorship deals. Presently, Matthew Diemer, the host of a leading daily crypto podcast, and also a Congressional Candidate, is also the host of their educational podcast.

The OKBoomer team is also building Boomerswap. This will be a trustless and permissionless decentralized exchange meant to ease the purchase of OKBOOMER tokens.   BoomerSwap will make it easy to purchase the $OKBOOMER token, and other tokens the company partners with, with fiat and by swapping other tokens for it. There are also plans to gamify BoomerSwap, which will further incentivize people to use this exchange and also buy OKBOOMER tokens.