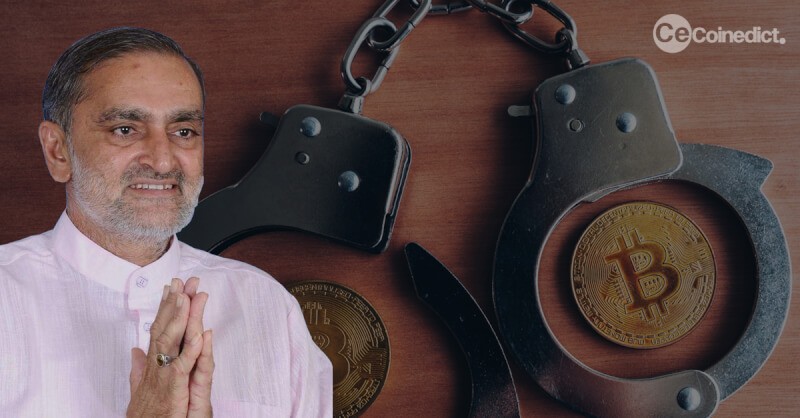 The former BJP MLA, Nalin Kotadiya, has found himself in police custody after attempting to evade the long arm of the law. The absconding former politician is alleged to have been involved in a criminal kidnapping case and apparently intended to seek the extortion ransom amount in Bitcoins. The Ahmedabad Crime Branch in Dhulia district of Maharashtra led the arrest of Nalin Kotadiya.

Police Superintendent Jagdish Patel and Police Inspector Anant Patel were alleged to be in cahoots with Kotadiya in the case of extortion and kidnapping of a Surat-based builder, Shailesh Bhatt for 176 Bitcoins (over 80 million). Although the two police officers along with nine other individuals accused to be involved had been arrested, Kotadiya had been on the run since the case began. After ignoring summonings by the Gujarat CID (Crime Investigation Department) to appear before the Ahmedabad Court, Kotadiya was considered as a proclaimed offender.

Shailesh Bhatt had filed a complaint against the two police officers along with Kotadiya claiming that he was being extorted for Bitcoins that he had invested in the company BitConnect Investment Company. Official reports state that Shailesh and Kotadiya’s nephew Kirit Paladiya (an accomplice of Bhatt) had been abducted and extorted by Amreli police officers.

Investigations later revealed that Kirit Paladiya was the brains behind the conspiracy and that he had actually cut a deal with SP Jagdish Patel along with others to rid Bhatt of his Bitcoins and divide the loot. Nalin Kotadiya released a press statement back in May and claimed that he was being ‘framed by the conspirators’.

The continued investigation found that Shailesh Bhatt attempted two extortion cases in order to recover his Bitcoins. Consequently, the Gujarat CID Crime Branch also filed a case against Bhatt, along with the rest of the individuals involved. It was also revealed that out of the entire ordeal, Kotadiya allegedly was able to obtain INR 6.6 million from the extortion of which INR 2.5 million was recouped from the nephew, Kirit Paladiya.

South Africa is getting cryptocurrency regulations after losing billions in scams