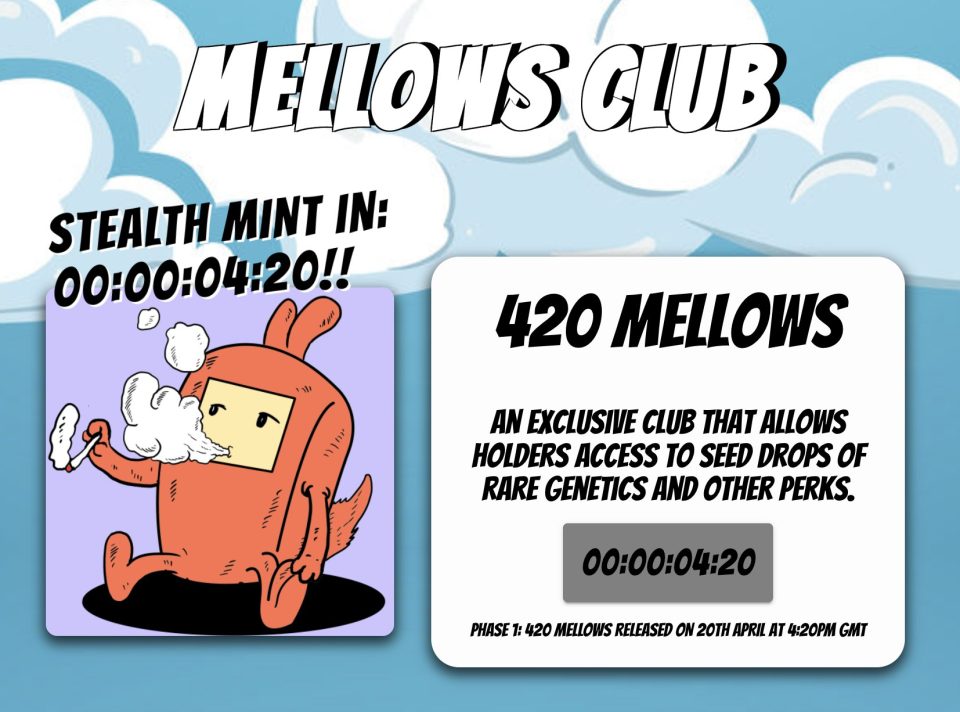 While it is fairly easy to buy seeds online from the numerous vendors that promise delightful  strains such as “Strawberry Candyfloss” or “Wedding Cake Cookies” for around $10 per seed, the good stuﬀ, genetic wise, is often sold through online auctions where a single seed can fetch upwards of $500.

The Mellows Club plans to flip this model on its head by oﬀering unicorn genetics to holders of their cartoon-style NFT collection for free.

The fonder of Mellows Club and master grower BigTunaFeeesh, who currently works as the lead grow consultant for one of the largest cannabis producers in South Africa, has been collecting  rare genetics dating back to some of the original 70’s lines by Sam Skunkman, Tom Neville and Wally Duck as well as modern genetic lines by SeedJunky, In House, Ethos and Jungle Boys.

“Since July 2019, I have been growing in a fully licensed facility in Stellenbosh, South Africa. I leverage state-of-the-art technologies combined with decades of experience to produce genetics not available to the public and have enough space to grow out; hunt, and do selections through thousands of plants to find that unicorn I’m proud to put the Mellows name on.” Said BigTunaFeeesh.

Mellows Club plans to hold drops of these “unicorn” genetics to holders of their NFT collection periodically and send the seeds to anyone that lives in a country that is legally allowed to accept them. To stay compliant, Mellows Club has one of the top cannabis attorneys in South Africa on board, namely Naven Pillay, who is currently working on the constitutional development to legalize cannabis in South Africa.

“As a previous prosecutor, I think it is ridiculous selling seeds are illegal in some parts of the world, and am proud to contribute to the seed club model. I think Mellows Club will show what’s possible in terms of how we form collectives in the cannabis space”

The Mellows Club NFT collection consists of only 420 unique characters made from over 50 traits. The cartoon style is inspired by watching too many cartoons while baked on one too many joints. The characters all look like marshmallows but feature bull horns, devil’s tails, chicken wings,  bunny ears, and other strange things you may find on a regular creature giving them an almost Simpsons cross Lampoons flare.

“We wanted to make the art fun and playful, representing the Mellow brand. Honestly, I just got blazed on TK Mellows and drew for a few days… The guys let me have full creative control, which allowed me to produce something I think is pretty cool” said Danko, the artist.

During the next month, Mellows Club plans to raise awareness for the project through collaborations with other popular NFT communities, allowing those that want to purchase a Mellows Club NFT a chance to sign up for a waiting list.

Closer to the mint day, Mellows Club will draw a raﬄe allowing those that win to mint one of the Mellows Club NFT’s in an environment free from bots and gas wars.

“We based the contract oﬀ the gas optimized ERC721A contract Azuki pioneered for Mellows Club and added oﬀ-chain whitelisting for the upcoming allowlist mint. This should allow buyers to mint for low gas, and in a time period they are comfortable with which will help oﬀset expected CO2 emissions for the mint as well as save buyers money.” Said Elonsdev.

Mellows Club will also work with Aerial by purchasing carbon credits in order to oﬀset the collection’s footprint.

“We are proud to have the opportunity to create a collection that is carbon neutral by supporting Aerials’ eﬀort in reducing carbon emissions in the NFT space.” Said Elonsdev.

While the focus of Mellows Club is rare genetic seed drops the team plans to grow into a recognizable cannabis brand both online and oﬀ.

To start, the team plans to launch a merch store that will sell favorites such as hoodies and caps, but also specialty cannabis-related items such as rolling paper, trays, and pipes.

The team then plans to expand into the market through cannabis shows and events as well as marketing online to the cannabis audience through a variety of metaverses and metaverse land.

Mellows will also be entering strains into various Cannabis Cups around the world in order to solidify the Mellows genetics as the best.

“The cannabis seed industry needs a shake-up and Mellows plans to create one of the most exciting upcoming brands the cannabis space has seen in a while” Mellows Club Investor, HyptoCrypto said.

To find out more about Mellows club visit the following links: WEBSITE: https://mellows.club