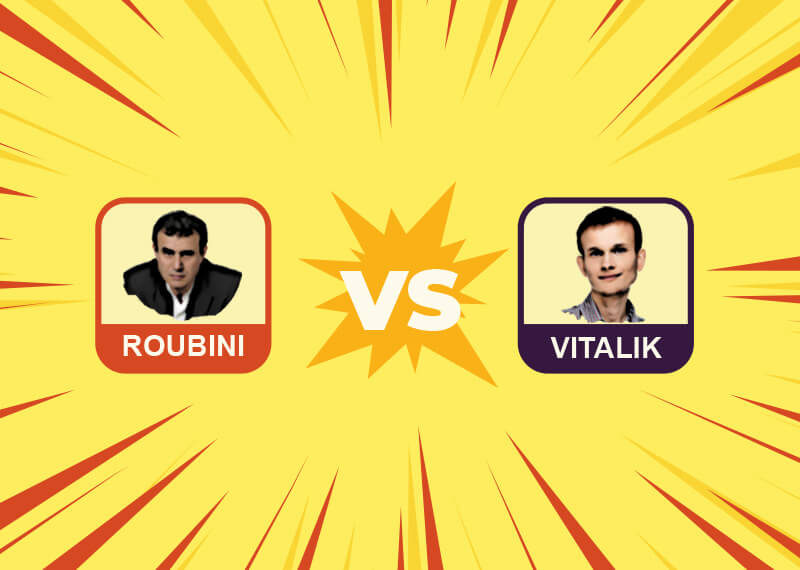 BitMEX CEO has offered to pay the entire production costs to host a live debate show between Nouriel Roubini and Vitalik Buterin. Roubini has already turned down many offers from the journalists whom he considered to be involved in the “shilling scams”.

Hayes made this offer in accordance with the comment made by Roubini stating that he would be happy in order to engage in a live debate with Buterin if they have a moderator who is not biased and who doesn’t pretend like a pseudo-journalist.

Roubini has No Interest in Interacting with Laura Shin

Roubini has stated that he does not have any interest in interacting with Laura Shin, a former contributor for Forbes who has more than 102K followers on Twitter. She recently launched a crypto-related podcast on her own called “Unchained”.

Earlier Shin has asked both Roubini and Buterin about their interest in appearing on her show. After the Senate hearing that has happened recently, there were many back and forth arguments with Peter Van Valkerburgh, research director of CoinCenter. Many journalists requested Roubini to participate in a debate with Buterin as Buterin is often a target for the harshest criticism made by Harvard PhDs.

Buterin has agreed to have a debate with Roubini and recommended Kevin Pharm, a very famous vocal critic of Buterin to act as a moderator and host the show.

Hayes’ has stated that he wants to conduct the debate either in London or New York. He committed to cover all the costs. The venue, press time, the date has been not yet revealed but there are so many enthusiastic journalists who are eager to cover this debate.

For most of the people, this debate is appearing as a useless exercise because Roubini always considered cryptocurrency as nothing but a scam. He had already engaged in an hour-long debate and panel discussion with Joseph Lubin, co-founder of Etherum in the month of May 2018. At that session, he has explained that cryptocurrency and blockchain technology is nothing but a scam.

Some Twitter users are recommending Roubini to “not speak in a language that only economists understand”. Though Buterin has sound knowledge in technology he may not understand the terms that are related to economics.

It is important to have a strong background and understanding of economics, computer science concepts, business and international politics. In Academics, crypto and blockchain technology are considered as an interdisciplinary field and requires experienced faculty. This is the main reason why most of the universities haven’t incorporated this course yet. Cryptoglobe has reported that New York University, the place where teachers are offering a graduate-level course for cryptos.