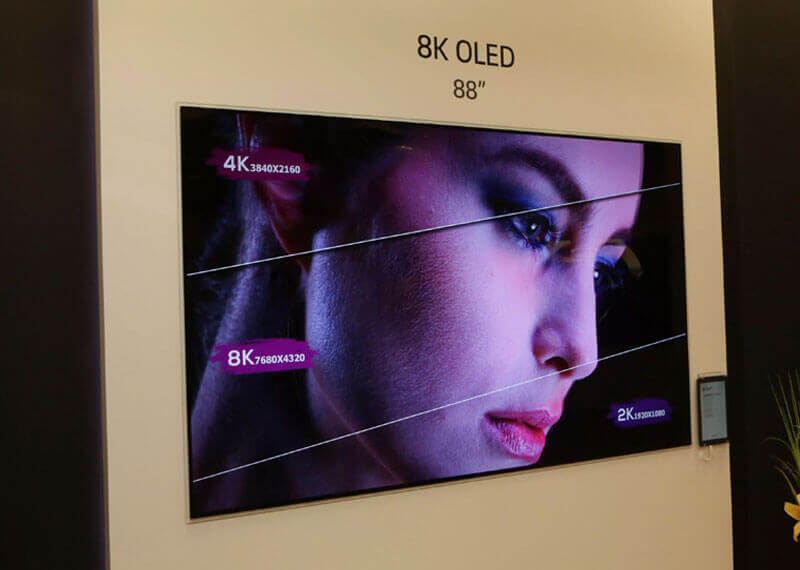 CES will not be CES if you don’t find unique screens put up on display. While Samsung already showcased its new MicroLED TVs, LG Display also showed off its new innovative screens at the event. This includes a 65 inch 8K OLED TV screen, 65-inch 4K OLED and the high-end 88-inch 8K OLED TV screen.

The 88 inch 8K OLED Television screen is the most exciting one among the other LG Display new gadgets. LG Display has incorporated a massive upgrade to its Crystal Sound technology which it had launched in the year 2017. The screen technology now features Dolby Atmos sound system on the OLED screen directly, thus eliminating the need of external speakers. In simple words, the OLED screen itself produces the sound.

LG Display says that its 88-inch 8K OLED television screen has the capability of producing 3.2.2-channel Dolby Atmos audio. Well, this sounds amazing and better now. You will not just get an incredible big screen but also incredible audio as well.

Apart from the 88 inches OLED panel, the company also demonstrated the 65-inch 8K and 4K OLED screens at the tech fair. The specifications of the 8K panel are not known currently. However, the 4K screen is said to be equipped with the fastest and highly enhanced motion picture response time of the world. LG claims that the hugely upgraded response time of 3.5ms is best suited for action movies, sports or also video games.

Besides these, LG has also introduced the 12.3 inch transparent OLED and P-OLED panels. The company says that these two are best for automotive usage. Further, a new 27-inch Neo Art concept panel was also demonstrated which is best suited to be put in computer monitors. As per LG, a USB Type-C port can be used to connect this screen to computers as well as mobile devices. This is not it! There is one more 27-inch 4K panel with 0.11-inch bezels that is also best suited for desktop monitors.

Lastly, the company also demonstrated a new 13.3-inch panel that has a 4K resolution which is best suited for laptop screens. The company claims that this screen has a power consumption of only 2.8 Watts per hour.

Though it is still unknown when these amazing television sets will hit the stores, the future does seem exciting. The 8K screen might take time to come in the list of commercial products. However, the remaining new technology introduced by the company may most likely appear in products in the current year itself.

Meanwhile, Sony has also introduced two next-gen OLED televisions which also have the screen doubled as the speaker. However, the fact that most people do not know is that Sony bought this new technology from LG Display. But still, this does not take away the excitement from the latest LG Display launch.

LG has created two Crystal Sound technology OLED televisions generations already in the past. However, this time having incorporated Dolby Atmos audio system, the third generation might be all the more interesting.