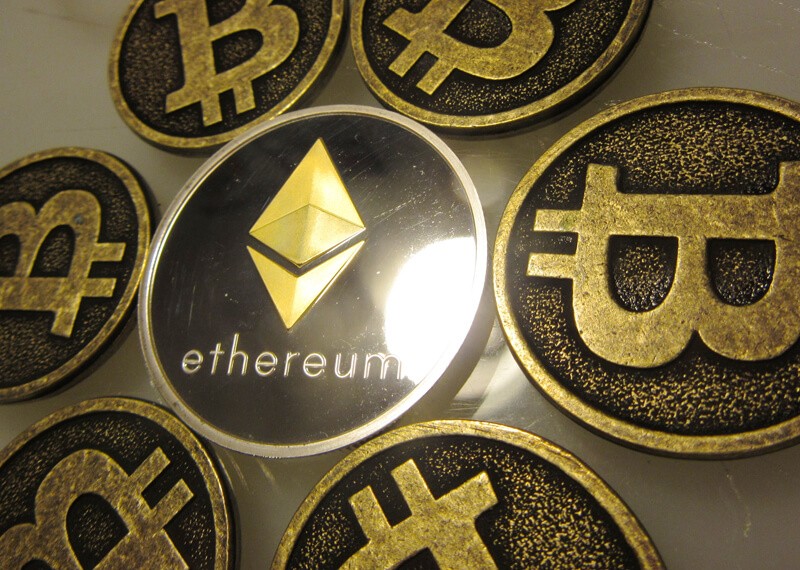 Bitcoin is all set to make its Ethereum Debut. Kyber Network, an On-chain liquidity protocol, recently announced on Twitter that they are developing a BTC-backed, Ethereum based tokens via creating Wrapped Bitcoin Tokens (WBTC). 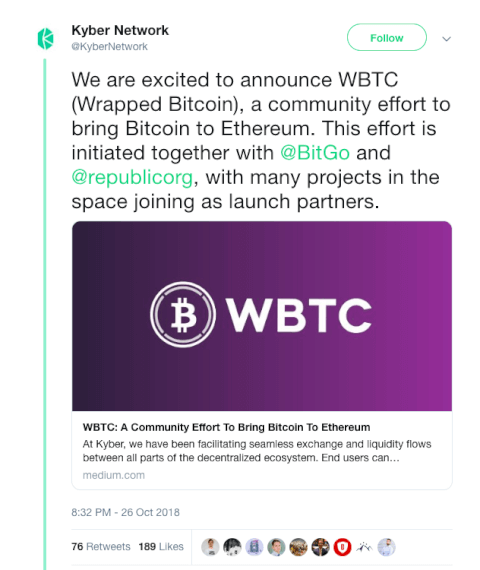 Kyber is collaborating with the crypto-custodian BitGo, Air Swap, IDEX, Andreessen Horowitz-backed MakerDao, Blockfolio, and many other crypto-based companies to make  WBTC a reality.

Kyber Network is a decentralized service set up for fast exchange of cryptocurrency assets. It was founded by Loi Luu in 2017.  It is an on-chain liquidity protocol that anyone can look into for a huge variety of inter-token use cases.

Additionally, dApps permit customers who are not their token holders to use their services and platform with other tokens. Kyber Network is connecting the fragmented, tokenized world through enabling  effortless and instant transactions between ecosystems, other use cases, and platforms.

According to the blog post, Kyber Network has been working hard with BitGo for the last couple of months on an open token standard to add bitcoin and other digital currencies to Ethereum.

WBTC will be an ERC20 token totally secured by physical Bitcoin. It would be reportedly carried via regulated, qualified custodians.

The WBTC is a first of its kind and unique project. It basically intends to bridge the gap between two independent decentralized networks that are not identical in any possible way.

How Does it Work?

The WBTC will be backed by real Bitcoin at 1:1 ratio. The previous token will be issued when Bitcoin is stored into the system proposed by the foreknown partners. Therefore, when the WBTC holders wish to exchange their tokens for BTC, then the ERC20 tokens will be burned.

The burning method and issuance will be apparently put on the Ethereum blockchain, permitting the users over the world to access data regarding WBTC. The WBTC transactions are atomic, it means all the customer funds are kept safe when obtaining WBTC tokens. To make sure that all the WBTC’ Bitcoin reserves are accounted for a DAO will actively examine the smart contracts related to this project to assure that integrity is maintained.

Because of the absurdity of the project, Many people immediately questioned WBTC’s existence. Andreas Antonopoulos, a prominent Bitcoin-centric proponent responded to BitGo’s tweet by simply posting “Why?”

Andrea was not the only one who questioned the move. Jackson Palmer, the founder of Dogecoin jokingly tweeted that WBTC is placing a blockchain on another blockchain. According to him, it is a chaotic concept. 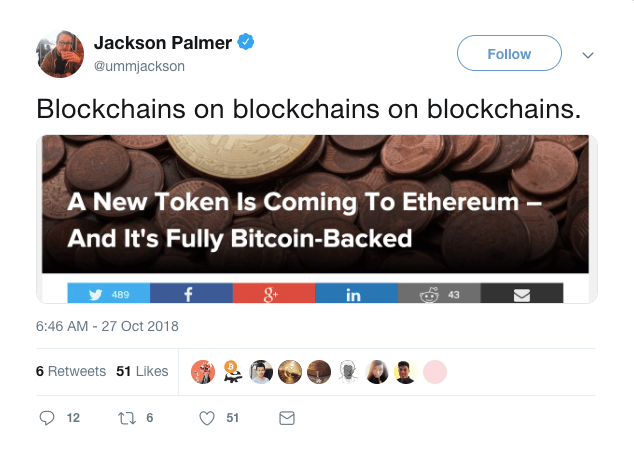 Partners of Kyber Network to the Rescue:

The New York-based AirSwap company, a P2P decentralized crypto trading platform, on Twitter, posted that Bitcoin is now a part of the company’s trading experience. And they are very excited to back the community initiative in bringing WBTC to the Ethereum Ecosystem. 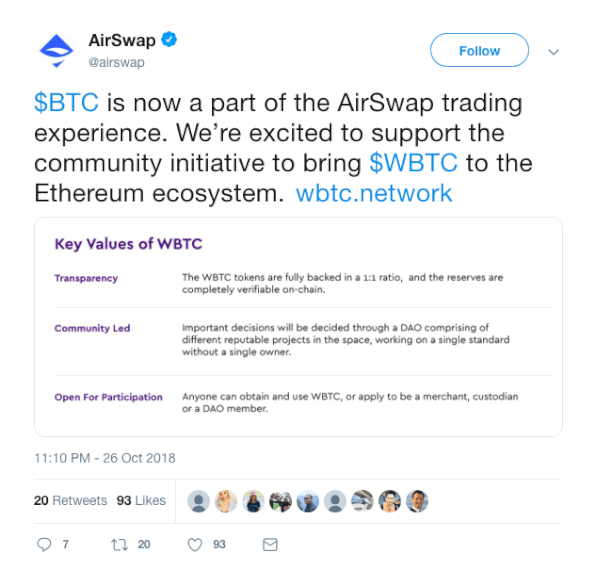 WBTC will permit developers to take benefit from BTC’s liquidity pool to enable BTC for Ethereum’s smart contract and decentralized application. As of now, there aren’t any defined use cases regarding this project. But with time, the developers will be able to create platforms, systems, and services by using WBTC.

One of the partners of Kyber, The Block revealed that the ERC20 token would possibly launch in 2019 allowing ethereum-backed BTC to be traded on DEX, increasing liquidity and opening the Ethereum ecosystem to users globally.