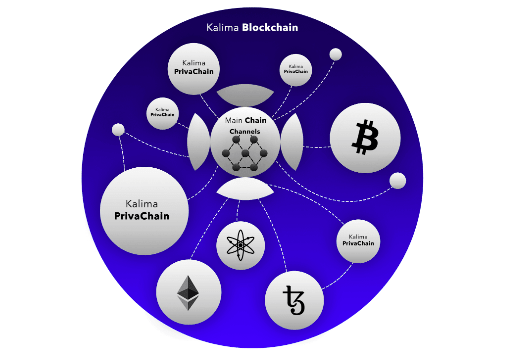 Kalima blockchain, has developed a dedicated IoT blockchain solution for industrial companies and asset owners, which is ready to be deployed at a global scale.  Kalima, a 3rd generation blockchain, offers a new way to independently and securely collect, manage and monetize enterprise data.

McKinsey estimates the potential economic impact of IoT applications to be as high as $11.1 trillion per year in 2025, and the E.U. Commission stated that 80% of the industrial data currently generated within the EU is never used (representing €270 billion). To Kalima, this gap is explained by the fact that current data management solutions lack many important aspects, including end-to-end data management and monetization.

Kalima has thus established a unique approach to the IoT industry, by utilizing blockchain technology as a competitive advantage over cloud-based IoT solutions.

The Kalima blockchain is a decentralized ecosystem of enterprise-private and industry-public blockchains, dubbed “PrivaChains”. Kalima’s blockchain is built to handle very large amounts of sensitive data generated by industries collecting data via IoT sensors and analyzing that data in real-time. The PrivaChains can be linked to one another or, to other leading public chains (Tezos, Lightning, Polygon, and Cosmos hubs), boosting Kalima’s industrial adoption.

In fact, “PrivaChains” allow users to independently own, govern and manage their blockchain and the data stored on it, notably through decentralized applications (dapps), all the while maintaining data confidentiality, as permissioned blockchains allow only designated nodes to read the ledger and participate in consensus.

This feature creates a personalized client-side user experience that no other solution offers, as clients can create  their own token,  independently design their smart-contract models (client-side smart contracts), as well as build their own dapps through an open-source Application Programming Interface (API) which works with most programming languages.

Incorporating blockchain technology also allows Kalima to offer an end-to-end solution, from the collection of data, to its exploitation and monetization. With this system, the real-world data collected is immutable, and can be traced if it needs to be authenticated as qualified data. With Kalima Blockchain embedded into IoT devices (gateways), about 85% of the data collected is processed at the edge, reducing the cluster of data on the blockchain.

Kalima’s vision is to collect, protect and monetize data for industries. CEO Andre Charles Legendre said, “By 2025, 80% of the processing and analysis of data will take place in smart connected objects, such as cars, home appliances or manufacturing robots, and in computing facilities close to the user. All these sectors use connected devices networks to collect, manage and analyze data, it’s the IoT. Kalima protocol ensures the integrity of the data transmission and the immutability of the data storage and the possibility to monetize the data collected”.

Kalima’s objective for the near-future is to focus on the collection and monetization of Environmental, Social and Governance (ESG) data, providing qualified and traceable data for ESG ratings, reporting, and ESG data monetization.

With the recent development of new reporting frameworks within the ESG ratings, businesses are required to openly disclose their data on sustainability commitments, ethical operations, and social practices, making ESG data collection, management and analysis a multi-industry use case.

Kalima Blockchain consists of both a Kalima MainChain and a network of decentralized blockchains known as Kalima PrivaChains. It provides an interconnected blockchain concept as a new paradigm for solving the decentralization objective and increasing scalability, adopting a paramount feature from blockchains such as Cosmos and Polkadot.

As the company reaches its 10th anniversary, and after partnerships with several industrial companies such as SPIE,  Kerlink (prominent IoT gateway provider), Enedis (EDF electrical distribution network), ArcelorMittal and more, Kalima has decided to launch its ICO (Initial Coin Offering) in September, with a private sale finishing end of August,  in order to fully establish itself as a blockchain industrial company, and to raise their operations to new heights. The “KLX”, Kalima’s token, will be available on a Polygon ICO platform.

I am a breaking journalist for The Crypto Updates in London, covering Europe and the U.S. Beforehand I was a correspondent for HuffPost UK, the Press Association, and a night journalist at the Guardian. I considered Social Anthropology at the London School of Economics, where I was an essayist and proofreader for one of the college’s worldwide issues magazines, the London Globalist. That drove me to Goldsmiths, University of London, where I finished my M.A. in Journalism. Got a story?