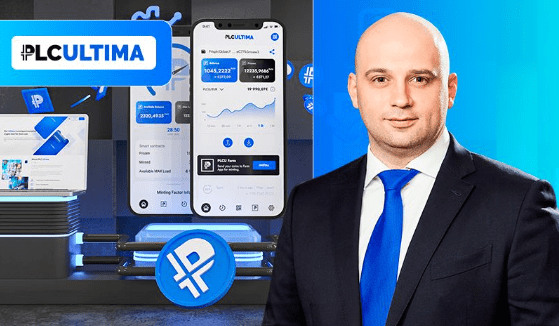 In December 2021, a new coin, PLC Ultima, entered the market, the price of which soared from $0.10 to $100,000 in just six months. So, the new coin surpassed the legendary Bitcoin by more than twice. Such figures for a young project are astounding, but even more astonishing is the work that went into the full-scale launch of PLCU. It has been in growth since 2016 and has developed an ecosystem of more than a dozen products.

The founder of this cryptocurrency is Alex Reinhardt, a venture capitalist, a businessman with a great understanding of the cryptocurrency market who intends to change the financial landscape of international systems. You could say that Alex Reinhardt is the new crypto-genius! We asked him a few questions about himself and his project.

Q1. Tell us about yourself. How did you come into crypto-industry?

My family comes from Russia, but we emigrated to Germany in 1996 when I was 15. We had to survive on social benefits for the first few years, and there was barely enough even for food. So, to help my parents, I started selling products from German pension funds. At university, I became involved in raising investments, and gradually, this became my job. Over ten years, I raised more than 500,000,000 Euros for various companies, and later I decided to start a business. But, alas, it went bust because of the betrayal of my partners.

I got cheated, got into debt, and was even about to have my children taken away because we could not support them. Then, out of desperation, I went into network marketing and simultaneously started studying cryptocurrencies. People said to me, “Alex Reinhardt, you’ve lost your mind!” I didn’t listen. I paid off all my debts in one year and started my first crypto project, which later gave rise to PLC Ultima. After this experience, I wanted to help people deal with their tragedies, earn money, and take care of their loved ones. Cryptocurrencies have become a tool for me to make money and help the world.

Q2. What sets PLC Ultima apart from other cryptocurrencies?

Incredibly, our community already has a million users from 120 countries worldwide. It is a fantastic community, close-knit and active, where everyone is interested in developing the system. We even have two unprecedented programs specifically for PLC Ultima users — a car program and a real estate program. You can buy cars or apartments abroad at up to 50% discounts. We also regularly hold international events so that PLCU partners can exchange experiences and contacts. The last event was in Dubai and was remarkable.

Another difference between PLCU Cryptocurrency and others is its purpose. I hope that PLCU will become not only a flexible income-generating tool available to ordinary people but also a bridge between the crypto world and the traditional market. We offer businesses innovative solutions to integrate cryptocurrencies into their operations and payments. PLCU is positioned to become an everyday means of payment. You can already pay in stores with our coins!

And, of course, with PLC Ultima, it’s easy enough to earn even though most people consider cryptocurrencies a complicated tool.

Q3. What technology does PLCU use? How are users protected?

PLC Ultima’s blockchain is based on the Litecoin blockchain, well-known for its stability, transparency, and transaction speed. We also use the Segregated Witness protocol update and CryptoNight as a hashing algorithm used in Bitcoin and Monero. Our wallets are secure with a private key and a six-digit PIN code. All data is stored exclusively on the user’s device without using third-party servers, which minimizes the risk of unauthorized access. If the user loses the device, access to the wallet can no longer be restored.

Q4. PLC Ultima’s price is growing at an incredible rate. How did you manage it?

Yes, as of April 14, 2022 PLCU price is 92,000 USDT on the Coinbase exchange. PLCU trades in two pairs, PLCU/USDT and PLCU/BTC, and you can also find the coin in the Bibox and HitBTC listings. For these rates and prices of PLCU, we have employed a whole set of strategies and tools to ensure continuous deflation. PLCU has a burn mechanism, removing a certain amount of coin from circulation. So we burn 1% of PLCU with every user transaction.

About 30% of the coins are permanently in users’ wallets and do not participate in farming, while 50% of the total coins are frozen. Additionally, the company is destroying 100% of its coins to avoid competing with its users for liquidity.

We are also reducing the production rate of new coins, i.e., minting. All this supports market demand and creates barriers for participants so that PLCU is always in demand.

Q5. How does mincing in the PLCU work? What are PLCU Ultima Wallet and PLC Ultima Farm?

We chose to mine because it is a greener and more affordable alternative to mining. You don’t need expensive equipment, vast amounts of energy, or technical training to mine.

First, you install the PLC Ultima Wallet and PLC Ultima Farm apps. The first is a wallet to store your coins and generated rewards. The second application is for holding new coins and is very easy to launch by clicking a button.

For Ultima Farm to start, you need to login to the system and purchase the Ultima Minter digital certificate, which has different categories. The higher the category, the more new coins you will get. That is a minting permit, without which we can’t control the number of participants in the network and the volume of coins produced. So you buy this certificate, go to Ultima Farm and choose how many coins you want to freeze — freezing can last from a year to three years. At the end of this period, you will receive the frozen funds and the amount of new, mined coins. So you can have a permanent passive income and protection from inflation instead of just buying coins and waiting for the price to rise for them. A smart contract protects all operations.

Q6. What other products does the PLC Ultima ecosystem offer?

We have more than ten products that are already actively used by Europeans! These include, for example, PLC Card crypto debit cards, with which you can make purchases with Litecoin, Bitcoin, PLCU, USDT cryptocurrency, and several others. We also have a crowdfunding platform called Platin Hero, where you can offer your start-up or become an investor and earn money from it. The platform is also mined, so investors don’t spend their coins. Instead, they freeze them and make a profit along with the start-ups themselves. Finally, we also have a global marketplace called PlatinDeal.

After our interview with Alex Reinhardt, we are sure that the PLCU coin has a good chance of becoming the payment medium accepted in every crypto machine or POS terminal in a few years. It’s no wonder — with such an impressive creator at the helm of the currency, all doors are open!