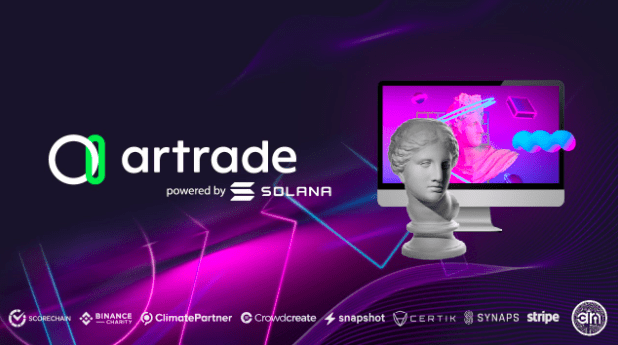 Earlier this year, the NFT sector of the crypto industry blew up after spending years on the sidelines, and in doing so, it revolutionized the way artists shared their art. Primarily used for sharing art and digital collectibles, the NFTs have offered an easy way to reach global exposure, purchase art with ease, and even display it in online galleries.

However, the NFT sector is still in its early days, and as such, it is still overly complicated for the mainstream population. In order to even access and make NFTs, one requires complex tools, knowing how to use them, the understanding of the technology that is used for minting and managing non-fungible tokens, and more.

In other words, it is simply still too complicated for most people to get attracted to the NFT sector, rather than get intimidated by it. This is what Artrade is trying to fix.

Artrade is a new project that aims to bring forth an NFT evolution by making NFTs easy, accessible, and understandable to everyone. The project believes that there are far too many artists out there who are missing out on the opportunity to go big due to the complexity of the state in which the current NFT market finds itself right now.

So, it developed an app that allows artists to sell their real works directly online to their audience, and to do it all safely and without the need for any expensive intermediaries.

The project is based on the Solana blockchain, and it is the first of its kind, allowing users to view, buy, sell, create, and keep NFTs. With the project’s app, users can purchase NFTs with crypto or fiat currencies, and they can do it without the high costs of the regular NFT market, which serves as another major barrier for artists.

Furthermore, Arterade also designed its NFT marketplace to consume minimal amounts of energy thanks to a partnership with ClimatePartner, which ensures that any and all CO2 emissions that the mintage of NFTs is producing would be offset by validated climate protection projects. This is also one of the reasons why it chose Solana for its infrastructure system.

A few important things to know about Artrade

A few more details that you should know about Artrade include its funding rounds. The project planned out three public funding rounds, with the first one already being completed after raising over $1.5 million. The second round started on December 20th, and it will last for a month, ending on January 20th, 2022. This round has a goal of raising $9 million, and it has a minimum investment of $250.

Round 3 will start on January 21st at 8pm, and it will last for 30 days, ending on February 21st. During this round, the token’s price will be $0.04, and the minimum investment will be $150. The project guarantees no cliff, no vesting, and 100% availability.

Other than that, it is worth noting that Artrade is teaming up with artists from all over the world, as well as with other projects which can help in various ways, whether by increasing its legitimacy, helping it achieve interoperability, improving technological capabilities, and more.

The project will even offer staking with interest received on a daily basis, and with no minimal time of lock, allowing users to deposit and withdraw their coins at any time.

The Impact of NFTS and Crypto on Manga and Anime