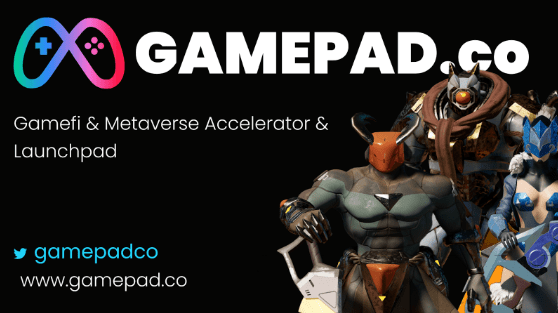 As it probably is already known to most, crypto launchpads provide platforms for launching new tokens and crypto projects. Most launchpads as they currently exist, do not direct more energy to other aspects of the process other than the public sales (Initial Dex Offerings) which is essentially a way for projects being launched on decentralized exchanges to get some crowdfunding.

Most people who participate in these sales are generally interested in short-term gains and are always looking to flip the tokens acquired as soon as they get listed. This, unfortunately, leads to the crashing of token prices shortly after it is listed. When this happens, even very good projects end up losing the momentum they had gathered from their communities to the dismay of the projects’ teams and their investors.

Gamepad is a new platform that is quite interested in solving the aforementioned issue. They are a decentralized network that will consolidate the massive reach between the team, the council, the community, the influencers, the exchanges, and many other allies to make sure projects that get incubated at Gamepad.co are blockbusters!

Among the features of Gamepad are an IDO launchpad, an incubation program, a platform for the sales of NFTs, and a lot of other features to let game makers and metaverse developers support their respective projects’ long-term principles and community strength.

It is a decentralized network that integrates the great reach between teams, the council, the communities, influencers, exchanges, and other players involved to ensure that projects on the platform are smashing hits.

Who Are the Team Members Behind the Gamepad Project?

The core team consists of Eric Su, Abhishek Rathod, and Davorin who have great experience in their respective names and are the excellent leaders this project needs.

He is the Chief Executive Officer of Gamepad.co and is not new to this industry. He has spent time developing games and other tech products. He developed 8 games in the early 2000s and has founded 3 tech startups in the 2010s – Exnetwork, Cosmic validator (co-founder), and Armament agency.

He is also very involved in many other tech companies in different capacities. He has also invested in more than 50 GameFi projects. He is highly skilled at efficiently building up development teams from scratch within a short time. His skills and various leadership roles in the tech space have made him fit to lead the wonderful team at Gamepad.co

Abishek is the Chief Operating Officer at gamepad. He is a graduate of the Singhad College of engineering and was a professional poker player and influencer before going on to develop games at KrazyStudio Private Limited for over 8 years and currently serves as a director.

He is also the founder and admin of V-street Netserve Private Limited, an Indian professional eSports portal, and serves as a director at KrazyPixel Academy and Vevento Innovations.

Davorin Bebek serves as the chief marketing officer for gamepad.co and is passionate about aiding business development and boosting sales in startups. His skills in social media marketing, strategy, and consulting have created novel ways for the growth of respected blockchain companies like Meter and Node Kapital. His skills and experience would now be channeled towards the development of Gamepad and taking the forefront in this space.

Aside from the core team, there are 20 other team members consisting of a team of 8 developers with experience in building launchpads and other DeFi products. They will be involved in coding the main contracts as well as the EVM and Rust ports, NFT Marketplace, and Guild Dashboards.

A team of 12 individuals will also be involved in operational duties to ensure success for all projects.

Gamepad currently has 10 triple-A Blockchain games using the accelerator with 15 more waiting. The team is dedicated to creating the best launchpad for Blockchain games and has attracted great partners and investors. They hope to be the GameFi and metaverse equivalent of Ycombinator. With its team and backers, they certainly have taken steps in the right direction.

SHIB+AXS= YooShi? YooShi, the Owner of the Two Cusps of GameFi and Meme, may Usher in A Bigger Outbreak