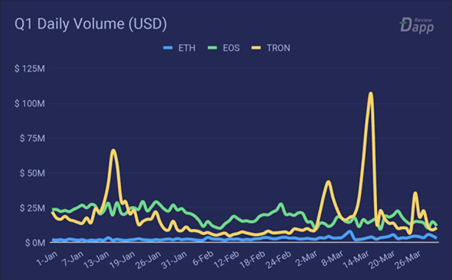 Data shows that gambling is becoming a main use case scenario for the Tron Blockchain. With an estimated 432,000 users, it has been revealed by Dapp Review, that the dapps on the Tron network has facilitated almost $1.6 billion in activity, for Q1 2019. Almost 64 per cent of dapps nowadays helps in gambling. Almost $102 million worth of transactions alone has been done on the 15th of March, 2019. This is in comparison with the $16 million done per day on EOS dapps and $4 million per day on ethereum dapps. In the year 2018, Tron separated from ethereum and became an independent company. Also, it can be said that after the separation, Tron regained its popularity due to these online gambling websites. 27 per cent of Tron dapps is casino games, while 36 per cent are high-risk games. 37 per cent of dapps falls in the category of both.

The main catalyst to this move has been the founder of Tron, Justin Sun. It has been reported that the Tron Foundation received $10,000 and more of stable coin Tether, in order to build games for the Tron Accelerator held in December 2018. This amount has been received from Sun’s personal account and not the company. To the people of China, the blockchain brings a lot of freedom for doing gambling and other services. Tron’s popularity has been due largely to providing an outlet for gambling enthusiasts who reside in areas where it’s not legal or safe to play online. This shows that the strategy adopted by Justin Sun is really paying off and has been effective as well.

Still, even though the price of the tokens increased in the month of January 2019, the developer contributions have remained the same ever since. Dapp Review’s Niu said that most users on these gambling dapps are fake accounts, and they are only using the dapps to get more tokens as well – which in terms of jurisdiction, just forbids buying TRX with fiat money. However, Niu from Dapp Review said that ethereum has a better potential future since a lot of people are working on other infrastructures and token standards.

Income that is tokenized

Open-source developers use gambling dapps as a way to earn their income. This is because monetizing their contributions on the blockchain ecosystems is very difficult. It is said that TRX has already paid dividends of $9 million in three months since launch, which is used by 888tron players for betting and receive a dividend for each bet. About more than $300 million of TRX has passed through the 888tron dapp.

On March 15th 2019, the players cashing out on the 888tron dapp had increased. This shows that blockchain is great for gaming and gambling. There are three blockchains to choose from, as of now – Tron, ethereum and EOS. Also, another thing to keep in mind that the Tron Foundation support the developers.