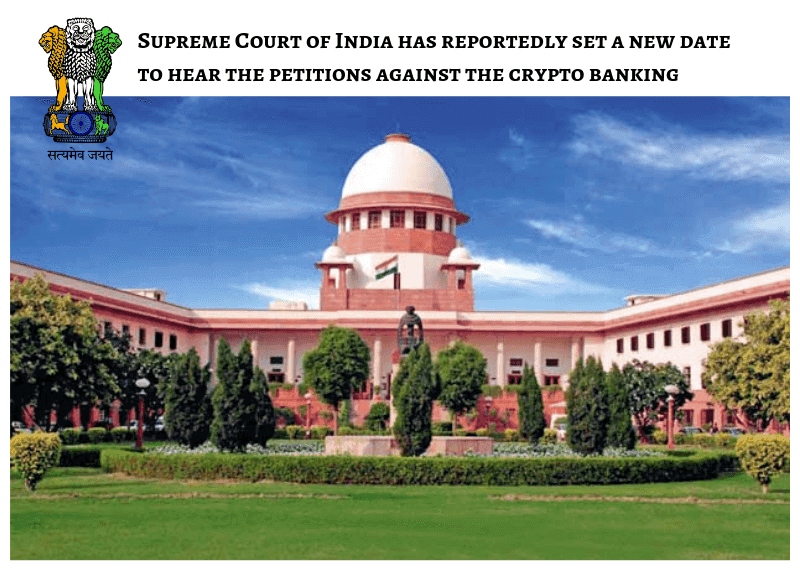 The Supreme court of India has set a new date to hear the petitions against the crypto banking ban imposed by the Reserve bank of the country. In the meanwhile, the Indian crypto community is running a campaign on social media platforms requesting the court for positive regulations on crypto banking.

The Indian Supreme court recently scheduled the date for the hearing of the petitions against the crypto banking ban on January 15, 2019. On that particular date, the court is reportedly believed to revisit the crypto case.

The Reserve Bank of India issued a notice in April this year banning all the regulated financial institutions from offering services to crypto exchanges. By July this year, all the banking institutions in the country agreed and ceased the accounts of the crypto firms.

The Supreme court initially was set to hear the case on September 11 yet frequently postponed the hearing. Later on October 25, it requested the administration to submit a counter affidavit in the span of two weeks, describing its crypto regulatory progress.

Therefore, the Indian government filed a counter affidavit with the court and stated that it is expecting the regulatory framework will be finalized next month. According to a leading news outlet, the minister’s counter affidavit is justifying the central banks crypto banking ban.

The Ministry of Finance formed a committee back in the year 2017, which was led by Subhash Chandra Garg the Economic Affairs Secretary. The main aim of the committee was to suggest crypto regulatory measures. The ministry further noted that the committee is expected to submit its report in the next meetings that are scheduled in December this year and January 2019.

On October 31, Nischal Shetty, the CEO of the Indian crypto exchange Wazirx started an ongoing Twitter campaign calling for ‘positive regulations’ for the crypto industry in the country.

Nischal who has around 55,100 followers on Twitter posted a tweet requesting the Indian government to set up positive regulations in crypto as the youth of nation have found a new way to make money. He also added that it is very important when there are not enough jobs for everyone in the country.

He further added that the crypto community should come together and everyone needs to tweet to the Indian ministers every single day till they a reply.

‘The more we tweet the more chances of our voices being heard and crypto getting a positive regulation in India,’ Shetty quoted.

The CEO plans to continue this crypto movement till the time the government decides to take a positive stance on regulating crypto in the country. The movement is still ongoing with many popular firms and their CEO’s daily tweeting to the Indian ministers about the regulatory framework.

He concluded by expressing his concern over the central bank’s banking ban on crypto as it has curbed the entire crypto industry of the country and the innovations that come along with it.

In addition to this movement, another crypto exchange called Bitbns started one more campaign on Change.org calling the rollback of the RBI notice. This petition has managed to gather 44,626 signatures as of now.