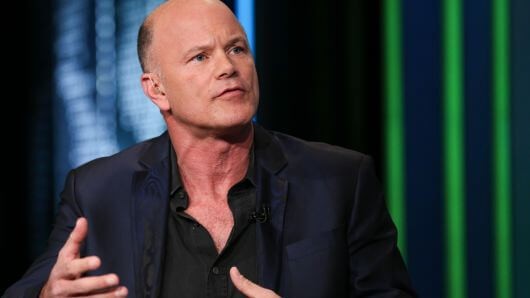 A bullish market is waiting for Bitcoin and another crypto, as anticipated by Michael Novogratz.

Being an eminent person of the crypto world who is referred as a constant crypto-bull,
Novogratz, with his analysis and anticipations stated that the dying interest of the seller of
crypto as it seems from the recent price changes in the market predict that this is the end to
the plunging Bitcoin as well as other dipping cryptocurrencies.

XRP with its spectacular price gain which continued for the entire previous week, with more
than 70% increase in just 24 hours led other cryptocurrencies altogether, and the whole
market gained close to $30 billion of market cap in the last seven days. Michael Novogratz
who is the CEO of Galaxy Digital which is a merchant bank for digital assets commented on
the Bitcoin’s current state and others as well. The event was ‘All Markets Summit’ at Yahoo
Finance. Besides stating his abovementioned comment on seller’s tiredness and the bearish
market which is going to turn bullish in recent future he also made some clear statements
which provide positivity to the BTC and crypto investors and also comment on the stability
of the coins.

He said that according to the BGCI chart that the market has reached its bottom and now
gaining momentum to reach the highs of last year’s end and it is seen as the acceleration
point to the massive bubble. He said that markets want to redo the breakout again and
investors would like to repeat the entire bubble.

Novogratz, at the event, spoke about the slim chance of Bitcoin to reach its all-time high of
$20000+ that it attained in 2017’s end in the recent future but the resilience, it is showing
around the price mark of $6000 is notable. It is building a stronghold which is tiring out the
sellers. He also stated that institutional finance is already making its way into the crypto
market and with the kind of stability it has shown in this year, the chances of the investment
to go up can be anticipated.

Though only a few have given a proof of ending of the bearish market of the crypto
according to the price movements in this year, many BTC and other crypto investors and
bulls are awaiting the appeal of the institutional finance to enter this market which is now
been side-lined and waiting for the tiny prompting to enter this market. Many investors are
also attaching their thoughts with the SEC&#39;s call for a BTC ETF which can act as a catalyst in
the shift of this investment foundation.

SEC has already provided an irritating carriage for delaying the take on the making of the
new ETF. Though the New York-based International fund manager VanEck is in favor of ETF
creating SEC is taking too long. The price resilience of BTC might seem because of the ETF
news; even if it is delayed, the investors are ready to wait.

XRP’s sudden turnaround added much to the crypto market as well. From portraying a
continuous bearish trend, it suddenly started increasing in value and reached $0.70 on this

Friday from its $0.30 in a day. The rise and the market cap gain was enough to take over the
second place on the crypto list according to the market cap which was earlier reserved by
ETH.

How Do You Know Which Cryptocurrency Exchanges Are Safer?

Ginga Finance: Improving the Security of Your Identity by Breaking the Link Between Source and Destination of a Crypto Transaction