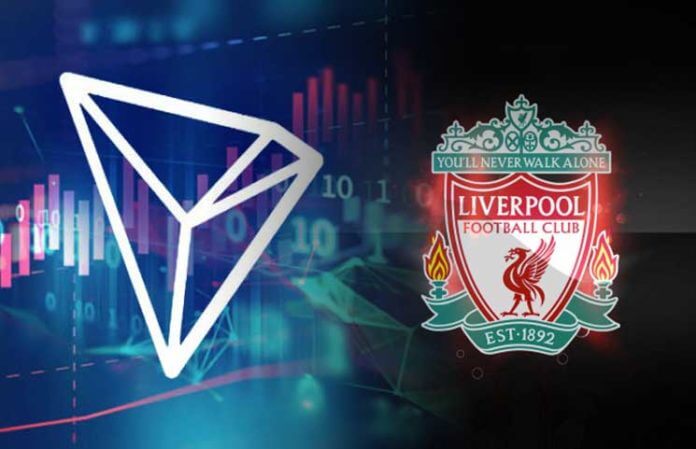 Justin Sun, the CEO of Tron, tweets that Tron foundation will enter into partnership with Liverpool. As per matter of fact, Liverpool is a professional football club in Britain. And, Tron Foundation is the one who led the foundation of Tron.

However, the spokesperson of Liverpool surprises everyone with his comments on the partnership. According to him, Liverpool Football Club denies such a partnership plan. They confirm that they do not have any idea to partner with the 11th biggest cryptocurrency, Tron.

On the other hand, the Sun fails to provide particular details on the partnership. He also did not tell the nature of future collaboration. In spite of this, the tweet includes a video in which the logo of Tron appears. The video also showcases an invitation from the football club, Liverpool.

In contrast to denials, the CEO of Tron claims to explore the forthcoming partnership. He says that he is looking ahead to enter into a business alliance with the football club. In addition to that, he also promises to release some more details about the partnership.

Co-founder of a startup IAmDecentralized, hopes the new partnership to be beyond massive. As per matter of fact, the startup is related to Tron blockchain.  Lederman adds that he can see the logo of Tron on the shirt of Liverpool Football Club.

On the other hand, co-founder of HummingPay, Samuel Austin agrees with the alleged Tron acceptance. Austin is also the developer of the firm. He believes that this acceptance will bring exposure to the mission of Tron. Further, he suggests that the football club will help develop the live streaming platform of them. To do so, the peer-to-peer platform of Tron will assist. As per matter of fact, the platform goes by the name BitTorrent. The company acquired the platform in the previous year’s July.

However, DApp.com releases a report and claims that the blockchain of Tron is the fastest growing DApp. The company is analytics which focuses on Dapps or decentralized applications.

Last year, Atletico Mineiro which is a soccer club, launched “GaloCoin.” The club which is a Brazilian premier league club introduced this fan token. According to it, the coin is connected to the exchange rate of fiat currency. The club claims that the coin has a value equivalent to 1 Brazilian real.

Interestingly, two other clubs preceded the fan token. It includes clubs like the French soccer club which goes by the name Paris Saint-Germain. The other club involved in the list is Juventus, an Italian soccer club. The two clubs launched the tokens last year in September.

Similarly, Michael Owen, former Liverpool soccer star, partnered with Global Crypto Offering Exchange. The exchange is based in Singapore and issued its coin. Interestingly, the soccer star himself backed the cryptocurrency in his name.

However, with all the facts and figures, it is clear that the announcement is a premature one. It is regarding the predisposition of Sun towards the marketing of Tron.

Also Read: Bold claim on Ethereum by the CEO of Tron