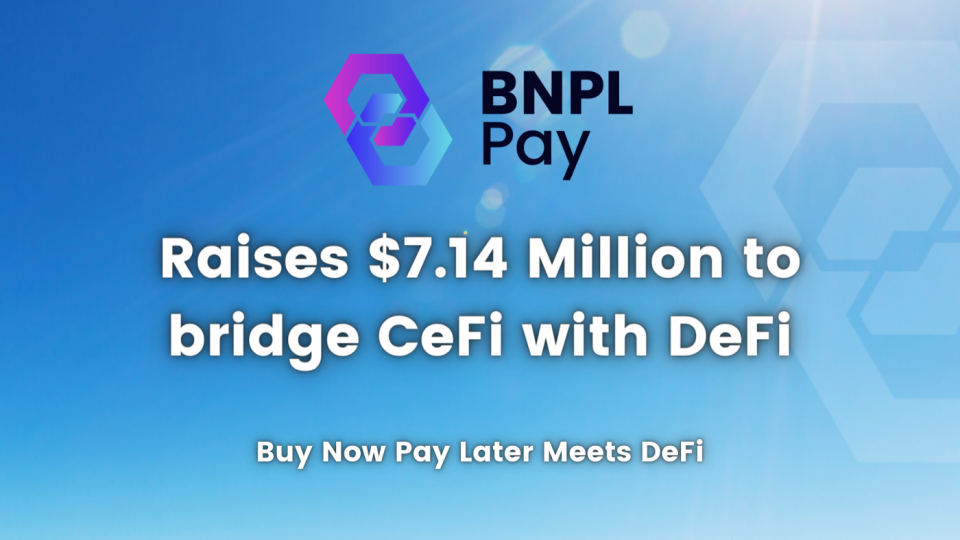 The team at BNPL Pay, a platform that aims to connect decentralized finance (DeFi) lenders to corporate borrowers for “sustainable” yields, reveals that it has completed a $7.14M investment round.

The BNPL Pay team has thanked everyone who took part in the funding round. As explained in a blog post, the BNPL token serves as a utility and governance token of the BNPL Pay ecosystem.

The foundation and the team noted that they’re now looking forward to updating community members as they continue to make steady progress with their roadmap. The Fintech platform’s developers further revealed that they’ve got “big things” in the pipeline, which aim to support the future of DeFi.

As noted in the update, BNPL Pay acts as a decentralized lending protocol that aims to put credit in the hands of consumers who require it the most, which would be people who don’t meet the basic requirements to qualify for collateralized loans.

In order to serve these clients, the BNPL Pay protocol supports an uncollateralized lending platform that specifically caters to such a need. The developers aim to address the counterparty risk associated with uncollateralized borrowing via a distributed network of Banking Nodes.

Their system works by delegating the routine processes such as credit checks, risk assessment and other due diligence tasks to pool operators. The BNPL Pay team has also created a set of special incentive structures that aim to reward (or punish) Banking Node operators for carrying out tasks in a proper manner.

Banking Nodes are responsible for managing liquidity pools (LPs), and have the ability to delegate assets to borrowers in the parameters they think are reasonable. Meanwhile, lenders may select an operator that matches their particular risk-reward preferences in order to perform interest-bearing activities that are based on transparent data.

Borrowers are able to apply for credit from all Bank Nodes. Once their application has been approved, they’re provided loans on customizable and agreed upon terms and conditions.

The BNPL Pay team further notes that unlike most other protocols within DeFi space, uncollateralized borrowing potentially offers a new “avenue” of risk that has not been explored within the nascent blockchain space (that being counterparty risk).

BNPL Pay aims to tackle this risk by allowing credit checks, risk assessment and various other processes to be handled by their node operators. With this type of approach, banking node operators “sit at the heart” of their protocol, and are able to effectively connect lenders with eligible borrowers.

The BNPL Pay team further explained that the incentive structure has been built into their protocol and BNPL tokens are used to reward Banking Node operators who carry out their tasks in an effective manner. Punitive actions are taken against operators that fail to perform their tasks. This is handled via a fair revenue share and a “penalizing slashing model.”

A certain percentage of the revenue generated from the interest payments will be given to the node operators as compensation. As mentioned in the blog post, the BNPL protocol will start off with a 10% revenue share, however, it will be subject to change “based on the voting activity from BNPL stakers.”

The interest earned will be claimable after a loan contract has matured. These terms apply “regardless of the repayment schedule,” the update confirmed. It also noted that Banking Node operators will have an additional 10% interest distributed to stakers in the pool (paid out in the additional BNPL tokens).

Slashing takes place when capital loss is “incurred from loan defaults,” the BNPL Pay team explained. They also noted that the weight of a slashing event will be “relative to the total loss relative to the pool size.”

For instance, if a pool of 1M USD incurs a $50,000 loss, then 5% of the staked balance and 5% of the bonded balance will get slashed. These digital tokens are then sent to a redemption contract and are “claimable by lenders of their pool proportionately.” And if a banking node operator’s token balance falls to less than 750,000, then their particular lending pool will “undergo probation, and be closed off to new lenders,” the BNPL Pay team noted. They also mentioned that they will “no longer be able to issue new loans until they top up their balance to 1M tokens.”

The BNPL token serves as the governance token within the BNPL Pay protocol and has several different utility functions, such as bonding a banking node and staking banking nodes as a type of insurance coverage if there’s a default.

Gamestar is Launching in the NFT Game with Blockwiz

Should You Invest Into Bitcoin Through Your Business?