Renowned crypto enthusiast and CEO of Eight, Michaël van de Poppe, recently tweeted and said that many people are expecting Bitcoin price to fall to $12k, which according to him is insane.

He also stated that there were people who claimed that Bitcoin would drop to $1k in 2018.

By tweeting this, he wanted to tell people that Bitcoin is not going to fall to $12k at any cost.

People are expecting #Bitcoin to drop to $12K.

Those were also the people claiming that #Bitcoin would go to $1K in 2018.

While the whole crypto world is in a bloodbath, bitcoin’s price has remained range-bound for the time being. BTC, on the other hand, climbed above the 20 EMA but has since fallen back below it. BTC begins this week with a red candle, which means that cryptocurrency investors must wait for the recovery phase to begin.

The price of bitcoin has fallen below the psychological threshold of $30,000, indicating a “red market” or “bear market.” BTC has been trading in a range between $28260 and $31450 over the last several days.

There has been some rising momentum in BTC in recent weeks, but bears reactivated and sent the token back to its consolidation phase once again, which is not good news for investors. The cryptocurrency market is in a long-term consolidation period, which is a symptom of widespread concern about a bear market.

Bitcoin’s current CMP price is $29530, and it has lost 6% of its market value in the previous 24 hours. However, there has been a 24% increase in intraday trading volume. This indicates that the token rush is still being held back by smaller whales. There is still a lot of bear strength in this circumstance. There is a 0.06291 volume-to-market-cap ratio. 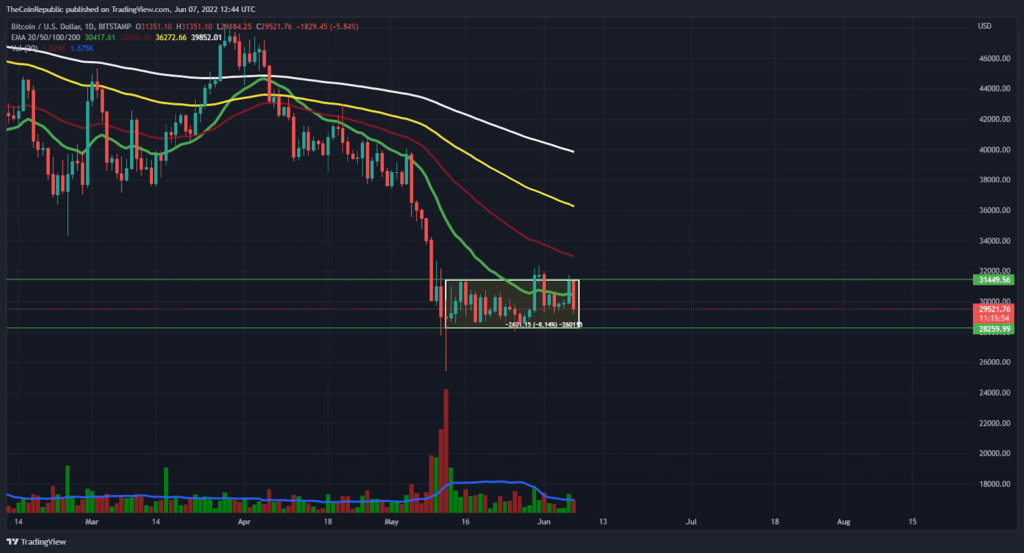 A Guide On How To Create an NFT For Sale