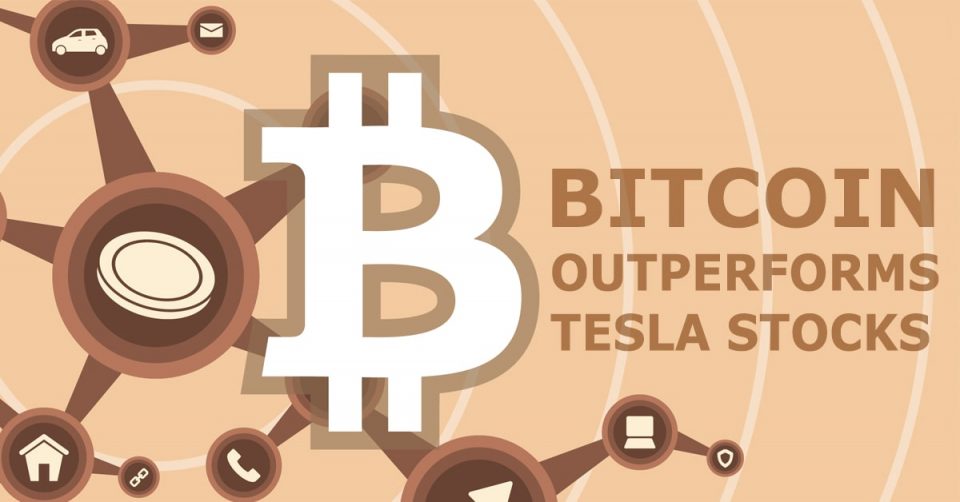 In the last few days, Bitcoin market value has seen an uprise. Since last year July, the cryptocurrency market, especially Bitcoin was in a dangerous phase. The Bitcoin and other cryptocurrencies lost 50% of its value due to the crypto boom in 2018. Given that the top-notch economists said that crypto boom is going to make people ditch the digital currency. Instead, the miners and the investors didn’t abandon their share of Bitcoin, and they finally got the reward they deserve.

According to the statistics and the price figure of YTD stocks of Bitcoin surpassed the stocks of Tesla by 50%. At the beginning of 2019, the stock of the Cryptocurrency went up to 30 percent. And at the same time, the stock price of Tesla went down with a 14.9 percent drop during the same time.

For a long time now, the top-notch cryptocurrency of the world is on a hot streak. In the past six weeks, the price of the Bitcoin has grown consecutively in a significant manner. And Tesla’s price is dropping drastically for the past three months. Some of the analysts suggest that the share price of Tesla reached rock bottom due to poor delivery. The analysts also said Tesla Model 3 cars are not up to the mark as far as distribution is concerned.

The significant analysts from Goldman Sachs, Morgan Stanley, JP Morgan among others are decreasing their target prices for Elon Musk’s Tesla. The reason as to why these analysts have made this decision is because of Tesla’s recent performance and its stocks. After a long struggle Bitcoin finally maintained a steady price of around $5,000 in spite of the 4th of April pullback.

Bitcoin delivers a better return to its Investors.

In the past year, the critics were the ones to give discredit to Bitcoin due to the crypto boom. The reproach eventually made a dent on the status of the Number One cryptocurrency of the world. Nevertheless, the top-notch cryptocurrency did outperform the conventional market very efficiently. Bitcoinist in February said that the inventors who had a single percent portfolio in BTC were benefitted. And in the long run, these investors even found greater returns with their investment in contrast to gold, S&P 500 as well as U.S. Treasury bonds.

Since its inception Bitcoin has beat NASDAQ, DOW, and S&P 500 every single year, and this time Warren Buffet’s Berkshire Hathaway also exhibited a feat like that of Bitcoin. In the past decade, Bitcoin has gone through a price drop of 85 percent. Bitcoin does not vary a lot when it comes to the stock market.

And this makes the cryptocurrency to feature much suitable hedge against some of the significant uncertainties that come in the mainstream arena. On the other hand, the cold hard facts of Bitcoin show that the cryptocurrency is more than a stereotypical hype.

Goldman Sachs’ David Tamberrino said CNBC, Bitcoin’s recent rise had put significant pressure on the share of Tesla. Consumers had a lot of expectation from Tesla.

Bug Bounty Program launched by Zilliqa for its Mainnet

After Singapore, Spain releases guidelines against advertising by crypto firms