Cryptocurrency exchange, Binance, in a recent tweet, had announced that it is suspending its services for a while to undergo system maintenance as the company was facing issues with its data and database synchronization on the platform.

More About the Maintenance Delay

Earlier today, Binance on Twitter posted that the ongoing system maintenance is extended by roughly an hour till 08:00 AM (UTC) on 19/10/2018. Because the data synchronization was taking longer than we thought. And officials in the team are working hard to finish the maintenance as sooner as possible. The original tweet can be seen below. 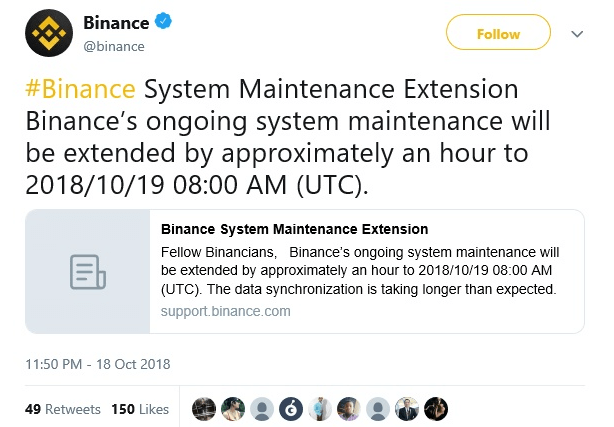 The team also stated that another announcement will be given once the system maintenance is completed. Customers will be able to cancel their existing orders, deposits, withdraw and use another account operations before the system is online. The cryptocurrency exchange further assured the users that their funds were secure and safe.

Within the next 2 hours, Changpeng Zhao CEO of Binance announced on Twitter that the company has managed to fix all the issues and the trading will resume in thirty minutes

“System is back online. You can cancel orders now. Trading will resume in about 30 min. So much for predicting the future..” he informed.

The Binance team, in another tweet, declared that the company had completed maintenance and the system will be back online by 9:30 AM (UTC) 19/10/2018.

The team concluded with stating that until the trading will start again, the customers would be able to process deposits, withdrawals, cancel orders and access all the other account-related operations. They apologized for the inconvenience caused and thanked the users for their support and patience.

Binance, in a nutshell

Binance is a popular cryptocurrency exchange founded in China last year. It eventually moved its headquarters out of China into Japan to avoid the ban on cryptocurrency trading imposed by the Chinese government in September 2017. By March this year, the firm had launched offices in Taiwan too.