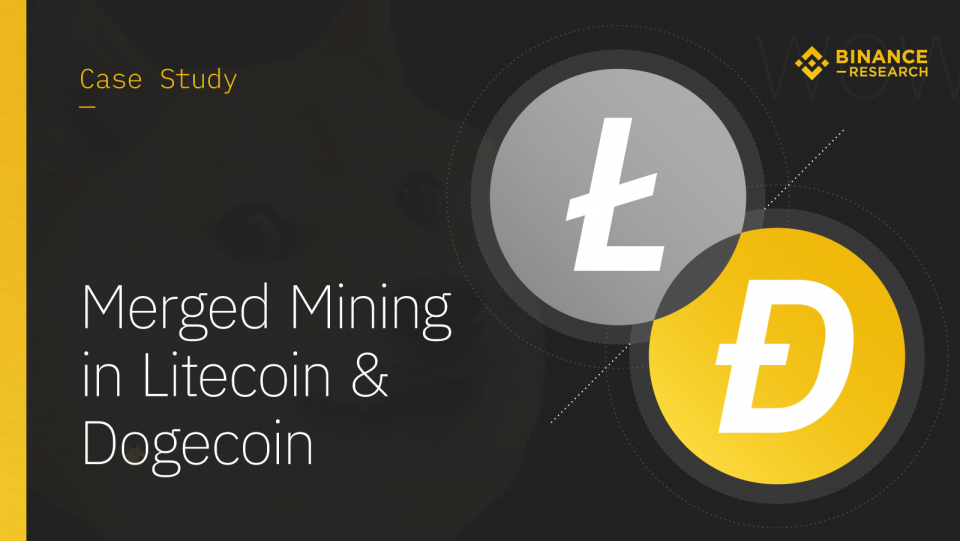 In a new research report on Auxiliary Proof of Work and how it works for Dogecoin and Litecoin, Binance Research analyzes how merge mining can help smaller blockchains in light of the upcoming halving of block mining rewards for some major blockchains.

Binance Research, the market research and analysis arm of Binance, has released a new case study report on whether merged mining, which is practiced by Dogecoin (DOGE) on the Litecoin (LTC) blockchain, provides increased security for smaller Proof of Work (PoW) blockchains.

Merged mining refers to the use of the work done for one blockchain (i.e. parent blockchain) on other smaller child blockchains, using Auxiliary Proof of Work (AuxPoW). In the report titled “Case Study: Merged Mining in Dogecoin & Litecoin,” Binance Research studied the merged mining relationship between Dogecoin and its parent blockchain Litecoin, two of the longest-standing cryptocurrencies, each registering around 30,000 daily on-chain transactions.

“Given that block mining rewards are halved every four years for both Litecoin and Bitcoin, merge-mining could potentially become a solution to maintain network security in the long-run as newer crypto assets, with higher block rewards, could be merge-mined within the same pools,” Binance Research noted.

Since Dogecoin’s switch to AuxPoW in 2014, Dogecoin’s hash rate has exhibited an extremely strong and positive correlation (0.95) with Litecoin’s hashr ate, according to findings by Binance Research. As of July 2019, nearly 90% of Dogecoin’s total hash rate comes from large Litecoin mining pools, with its blockchain processing around 30,000 transactions per day.

Binance Research pointed out that PoW as a consensus mechanism component has recently lost popularity in favor of Proof of Stake (PoS) consensus mechanisms for a variety of reasons, including but not limited to high mining costs and environmental impacts. Other smaller chains could potentially move to AuxPoW in the coming years in order to maintain greater network security while reducing the need for a separate miner set.

“While greater network security is the main purpose for implementing merged-mining, there are also potential disadvantages and risks to consider for both miners and the blockchain itself,” Binance Research said in the report. “Specifically, the value proposition of the underlying crypto asset needs to be compelling enough to attract a critical mass of miners to switch their current mining set-up to a new one that supports merged mining.”

Binance Research provides professional, data-driven insights and analysis for investors in the crypto space to increase the level of transparency and improve the quality of information within the current crypto ecosystem. The team consists of professionals with a background and experiences in blockchain engineering, investment banking, strategy consulting, academic research and data science. For more information, visit: https://research.binance.com/

Thinking Of Moving To The USA- Learn Here How Living In The USA Is Beneficial?