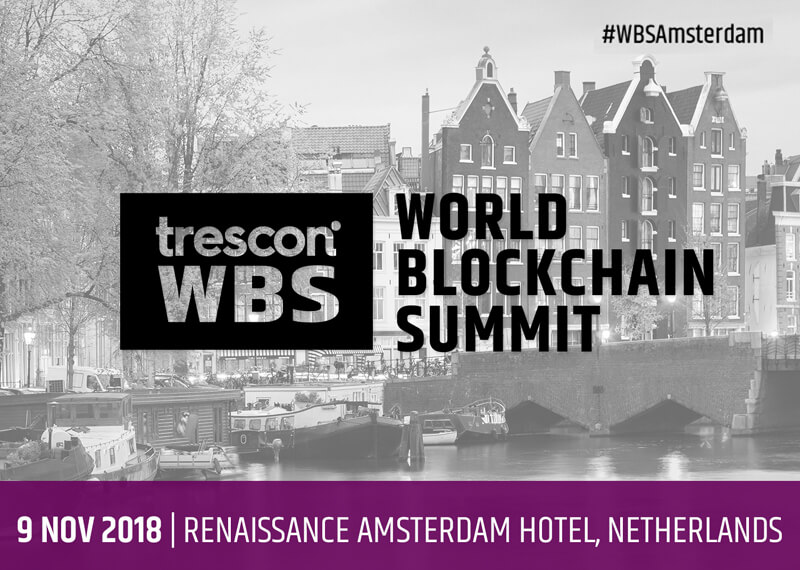 After a gripping episode in Frankfurt, World Blockchain Summit (WBS)  will embark on its first ever edition in Amsterdam, expanding its footprints in the European continent.

09 November 2018, Amsterdam: The month of November will bring to you the World Blockchain Summit’s debut into ‘The Venice of the North”, Amsterdam, at the Renaissance Amsterdam Hotel on 9th November 2018. A few weeks back, Dubai saw the success of the World Blockchain Summit that hosted more than 900+ attendees including governments, enterprises, investors, innovators, corporates, and emerging startups from all around the world.

Attendees will witness Trescon’s exclusive ICO GRAND SLAM competition, where participants will stand a chance to raise up to US$ 1 Million to launch their own ICO by pitching in front of global investors, including VCs, angel investors and key government authorities. With Tatau – a distributed supercomputing platform bagging the ICO Grand Slam award in the Dubai edition, the next ICO Grand Slam title is up for grabs for the best startup in Amsterdam.

The summit will see the presence of experienced delegates along with other eminent keynote speakers, who are well acquainted in the blockchain space. Some of the noted names that are scheduled to attend this event include, Dinis Guarda, CEO and Founder, Ztudium; Vanessa Grellet, Executive Director, ConsenSys, and Sergio Mottola, Executive Chairman, San Marino Innovation among other top-notch technophiles.

In an interview leading up to the summit, the CEO of Trescon, Mohammed Saleem said, “We are really excited to take our WBS series to Amsterdam this November. The European market is a boiling plate, ready to explode into the blockchain market. The summit will provide a platform for these enterprises to enjoy the fruit of their labour, as well as expose the continent to the blockchain race.”

The summit is officially being sponsored by premier partners that include Oryx, Naoris, ACO, TreeCoin, and BDX Alliance among various others.
Jamy Nigri, CEO of BDX Alliance was ecstatically quoted as saying, “At WBS Dubai, I was able to closely interact with government functionaries and top-level strategic decision makers. Kudos to Trescon for putting up such a great summit, I am really looking forward to attending the WBS Amsterdam edition and experience the same level of energy and excitement.”

Trescon is founded and managed by a group of specialists with more than 6 decades of combined expertise in successfully developing business events, trainings and consulting for corporates, governments, associations and high-net-worth individuals across the world.