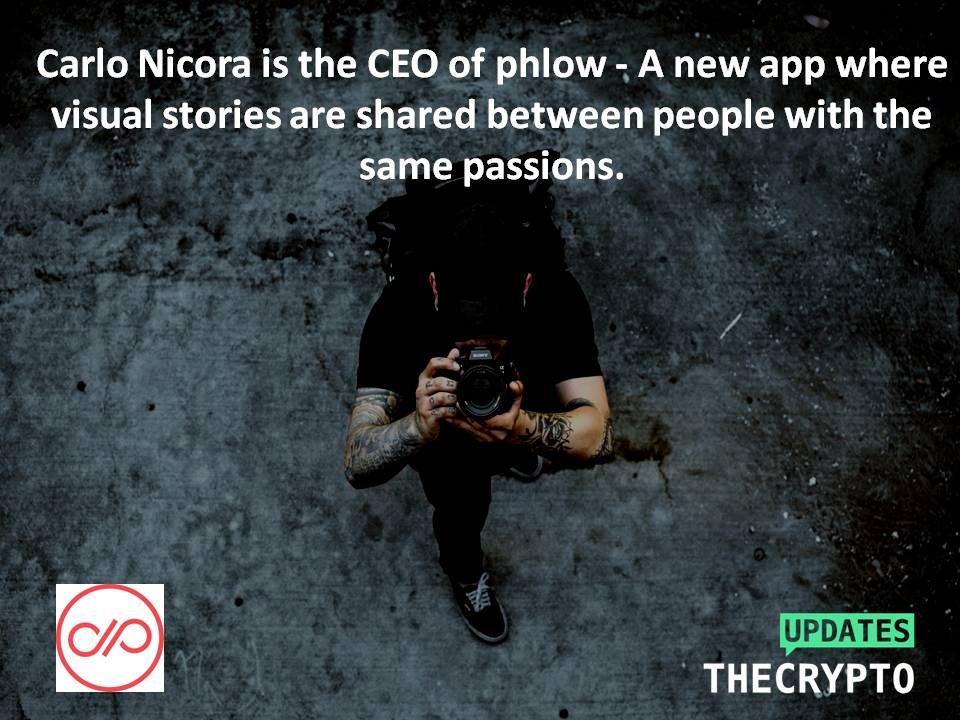 An interview with Carlo Nicora, the CEO of phlow, a new app where visual stories are shared between people with the same passions.

Q1: What is phlow and what are the problems that you are trying to solve?

Ans. Phlow is a new app where visual stories are shared among people with the same passions. In phlow, photography and journals are organized around themes, rather than profiles, so creatives find it easier for their work to be found, and readers can view what they’re truly interested in. Because we believe relevancy is so important in phlow, our team is in the process of creating a reward for community members who share the most relevant content on phlow. The majority of our advertising revenue will go back to the community this way.

In phlow, we are trying to solve two major problems. The first is that people are growing tired of social media because of the amount of irrelevant ‘noise’ that is on today’s platforms. Billions of posts are uploaded every day, much of it without a message or story, and it’s hard to make sense of it all. People ‘consume’ what their friends or influencers want them to see, rather than a content-based around their passions. There’s no real alternative, so people keep using it.

The second is that increasingly, people are growing more concerned about how their user data is being used to benefit the shareholders of large tech corporations. In phlow we never sell individual user data to advertisers – only community theme trend data. And the money we generate is given back to the community who offer this data, at the collective level, as a reward for their individual benefit.

Q2: What industry your targeting and what’s your plan/ strategies to tackle the hurdles within that industry?

Ans. Our plans at this stage focus on targeting small, niche markets which revolve entirely around people’s deep passions. These are likely to be the passions of people who are a little bit more introverted, who prefer online interaction to offline. And within these markets, we intend to target both the readers who consume this content, the creatives producing this content and the companies who produce the related offline products.

Take, for example, the comic industry. Within this industry, we will target manga fans as potential readers of phlow. We will also target cosplayers as people who want to showcase their creativity through photography on our community. And we will target comic industry companies who produce offline products – for example, books and games – as potential advertisers. Everything revolves around people’s passions, making phlow a rich, relevant and enjoyable experience for all.

Q3: Are you planning to attend some meetups or conferences in order to build global relationships with investors, partners, or other agencies? If yes, please name some and in what capacity you are participating in those conferences?

Ans. We’re not able to answer this at the moment. Yes, we will get involved but we haven’t decided which ones yet. We’re focused on securing our money for the next round of funding and the list changes every day.

Q4: What are the future plans for phlow?

Ans.Because phlow journals take each reader on a short, visual, and highly engaging journey, monetization is now taking place through paid stories and adverts for brands who want to develop content marketing in specific niches. We’re also securing further investment so we can grow and develop our community of users and release our reward them, later this year. In short, we ‘re creating the change we want to see in the world.

Q5: What are some of the biggest challenges you’ve experienced while developing Phlow?

Ans. Our biggest challenge to date has been developing the technology behind phlow so that it recognises the relevance of content in each specific them vertical. We have invested a lot in R&D to make sure we have a functional and scalable system. The second biggest challenge has been to simplify our user interface enough so that users have the best experience possible.

Q6: What’s your personal opinion on blockchain and how do you imagine a future built with blockchain at its core?

Ans. My view is that blockchain is the future – but the technology isn’t ready yet. We need to start seeing blockchain as not just a ledger for transactions, but a place where it can effectively support great ideas. We all need to work together to make blockchain’s future flexible, scalable and secure enough to allow it to be the engine behind many different solutions, rather than a solution in and of itself. Blockchain for blockchain’s sake is useless – it’s what you do with it that matters.

For example, imagine if I told you how great flour, yeast, and water is. But actually, these ingredients by themselves aren’t that great. If you can make bread from them, then you have a whole different story – because bread sustains life across our planet. We need to learn how to make the most of blockchain in the same way that we have made the most of flour, yeast, and water – to come up with something greater than the sum of the parts.

Q7: As a CEO, what do you do to keep your team motivated?

Ans. I try to make sure that everyone in the team sees that what we’re doing has a positive impact on the world. I also want to ensure that everyone has the opportunity to grow, both in terms of their personal growth and professional experience. In the context of their work for phlow, I encourage everyone to do what they love but I also push them out of their comfort zone. And I create a culture of openness, availability, and equality, where everyone has the same opportunity to thrive.

Q8: Anything you would like to say to our audience?

Ans. Never stop questioning, and never stop looking for something better. Social media was an amazing step forward but we’re beginning to reach its limitations. phlow is an idea which puts the user in the middle of their own experience, rather than friends or influencers. And the world is ready to let go of giving user data away for free. Big corporations should start sharing what they make with their users because we are the ones that make their profits possible. We should all be asking – where is my data being used and why am I seeing so many adverts? These sorts of questions will make the world a better place for everyone.