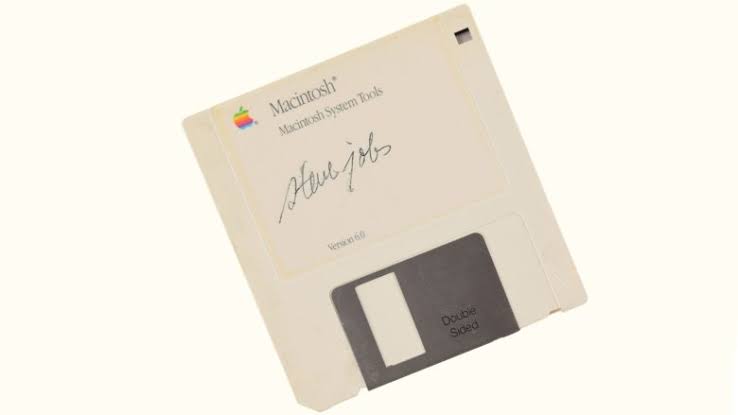 One of the original Macintosh floppy disks that bears the signature of the late co-founder of Apple Steve Jobs has been put up for auction. According to sources, the value of the vintage floppy disk has a valuation of over $5,000, or precisely $7,500. By the looks of it, the floppy disk is the latest and noteworthy memorabilia that has been signed by one of the iconic businessmen ever lived Steve Jobs.

Currently, the floppy disk bearing an autograph by the late co-founder Steve Jobs has been put up for an auction at the RR Auction located in Boston. RR Auction has been in charge of handling several numbers of sales related to Jobs and Apple in the past.

As far as the floppy disk is concerned, the product is currently listed to be in perfect condition. The signature looks a little smudged. However, the disk looks like it is in good condition and it has a quite blemishes & minimum ageing signs. According to sources, the floppy disk comprises of the Macintosh System Tools 6.0 Version software.

The value of the floppy disk is rising every minute

Also Read: Star Wars: The Rise of Skywalker’s Run time is Quite Shorter

The RR Auction website noted that the potential buyers have to place their bids before 6 PM on the 4th of December. After doing this, people participating in auctions can become eligible for bidding and get an extension. Moreover, at the time of extended bidding, every single bidding resets alongside a 30-minute timer. By the looks of it, once the timer elapses, the sale is closed.

Steve Jobs’ signature is worth thousands of dollars

Back in August, a poster from Pixar’s hit film Toy Story bearing Steve Jobs’ name had reportedly raised $31,250 in an auction. Additionally, the 1992 Networld Expo poster was allegedly sold for around $19,640 back in 2017.

Several other Steve Jobs-related items that were auctioned in the past comprises of a newspaper clipping, which was sold at $27,000. Macworld’s first issue fetched around $47,775 back in the year 2018. In the same year, an employment application that Steve Jobs has filled out by his hand was sold for more than $174,000.