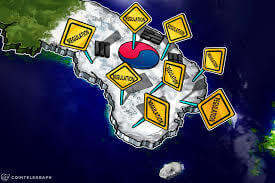 Recently, Coinone signs deal with Xangle and CertiK for improving security while
exchanging cryptocurrency. The new deal will foresee the disclosure goes through an
enhancement. By the looks of it, the report comes straight from the head of the company.
In South Korea, Coinone is the third number cryptocurrency exchange, which will begin to
work with Xangle. The working principles will go through investor protection, and it will
also project transparency. On the other hand, when it comes to CertiK, Coinone would focus
entirely on the security code. In addition to this, the collaboration between Coinone and
CertiK will also give rise to verification of technology. The partnership is also going to
involve in project information security.
The cryptocurrency industry is going through a dire state when it comes to the protection of
technology. There have been significant attacks of cryptocurrency theft by hackers across the
world.

The recent development by Coinone took place as the cryptocurrency exchanges are not safe
anymore. It is effortless to steal the said cryptocurrency tokens from distinctive exchanges
from around the world. According to the experts, the South Korean cryptocurrency exchanges
face the maximum amount of scrutiny due to their lack of security.
A minimal version of security gives rise to numerous illegal activities. There is an utter need
of cryptocurrency regulation as it will put an end to money laundering. The consistent and
comprehensive FATF guidelines are also on the verge of going through massive impact. On
the other hand, economic experts are testing the banking relationships in the country. In
addition to this, in Seoul, the authorities are refining their strict KYC processes and
programs.
On the 7th of June 2019, the Commission of Financial Services of Korea said that they are
going to be the sole authority to supervise the exchanges which takes place across the
country.

A different segment of terms and conditions for crypto exchanges

Wily​, brand new artificial intelligence guiding you through the world of cryptocurrencies.