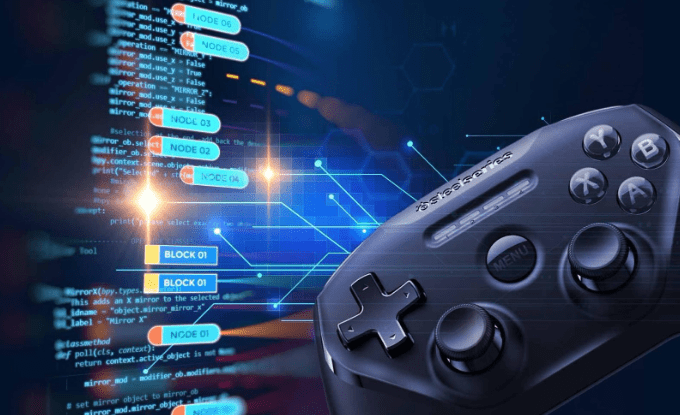 Gaming is exploding. The gaming business is presently worth over 170 billion dollars and is expected to reach $300 billion within the next 5 years. The current spike in new players, due to mobile platforms, has made gaming more convenient and accessible for the approximately 2.6 billion global gamers. Although being online for enjoyment is no longer enough for many. Time is valuable, and gamers have noticed they’re investing a lot in experiences with hardly any return. Their passion has now become a source of income. Till now, there aren’t very many options for casual gamers to profit from their gaming efforts outside of eSports except for sports betting or sites where you can play online gambling. The emergence of blockchain games have flipped the business, making gamers the massive economic decision-makers, not the developers. Play-to-earn crypto gameplay is a growing trend. But first, let’s grasp how it all operates.

What Are Blockchain Games and How Do They Work?

Blockchain software is a type of ledger that serves as a storing and keeping mechanism for data, and it is impenetrable to hacking, tampering, or other forms of manipulation. The transactions of a network are, in principle, open to the whole public. Game makers have undoubtedly recognized the promise of blockchain technology, which underpins cryptocurrencies such as ETH and Bitcoin, and which opens up endless possibilities throughout virtual marketplaces. Generally, most games will include markets where players may purchase and trade goods such as weaponry, avatars, and treasure boxes with other players in the game. However, although if they paid serious cash for it, it is possible that they may not actually own any of it. This is due to the fact that, throughout the majority of gaming existence, developers used a centralized paradigm, which means they had complete control on game mechanics, from the plot to the gaming assets that players accumulated.

Due to the fact that everything is controlled by a single corporation, gamers have no true ownership over their accounts or things. There are however some disadvantages to using this paradigm, such as a lack of clarity and the possibility of game mechanics being manipulated. Blockchain enabled the creation of decentralised and competitive virtual marketplaces, allowing players to have a genuine voice in the outcome of the game because gaming firms no longer had complete control over the whole gameplay experience.

The Best Blockchain Games in 2021

Compared to the traditional gaming industry, blockchain gaming is still considered a niche business, according to some analysts. But that does not rule out the possibility of further investigation. Even while they account for only a small percentage of the entire industry, there are hundreds of bitcoin games that are gaining millions of users on a daily basis (and a lot of revenue). Consequently, let us briefly review some of the individuals that are creating headlines in the bitcoin gaming market.

Mythical Games was already well-known in the videogame industry even before it entered the cryptocurrency gaming industry with Blankos. It is possible to make your personal diverse characters in the digital format of vinyl figures, with a particular emphasis on customizing the appearance of the figures. Also available is the ability for users to create and discover imaginary environments where they may acquire unique ‘Blankos,’ participate in quests, and become a part of the squad activities. Special edition Blankos have proven to be a big draw for shareholders, particularly in light of the company’s successful collaborations with artists such as Burberry and Deadmau5.

Axie Infinity, the uncontested master of crypto games, has pushed NFTs to new heights. This video game is inhabited with Axies (or digital beings), each of which is an NFT. Axies may be bought, traded, bred, and used to combat other users or groups in annual competitions. In one recent sale, a virtual block of property went for $1.5 million. The Axie Infinity digital economy is thriving, with in-game tokens Axie Infinity Shard and Smooth Love Potion, witnessing enormous increases (of up to 5,700 percent as of recently). Unlike some other well-known players, Axie advocates cashing out. Furthermore, AXS may be exchanged for USD or ETH. The game has become a full-time job in various nations, notably the Philippines.

This free-to-play alternative mixes gaming with DeFi on the Binance Blockchain. Mobox’s creators claim this technique would move videogames fairly close to GameFi as a system where gamers and shareholders may access games from several blockchain systems. The game’s primary purpose is to allow gamers to openly play NFT games and generate income. MBOX coins are utilized for processing transactions, staking, and administration inside the MOBOX network. Presently, the platform has 3 games, with two others planned to be launched soon.

How Inery is Providing a Secure Way For Database Management

cryptoexchangefx assist you with Easy and Secure crypto payments